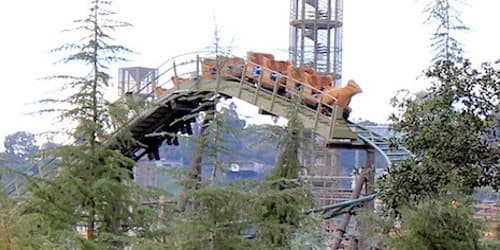 Flight of the Hippogriff

Flight of the Hippogriff (An Italian Concoction)

Long ago, high atop the tallest peak of the Pyrenees Mountains, there lived a magician. He lived in solitude, his only companion the hippogriff he had tamed.

Few had ever seen a hippogriff. It came from a land known as Scythia, north of the Black Sea. There, the mighty griffins, creatures with bodies of lions and the wings and heads of eagles, roamed. They were as strong as 100 eagles, and each of their claws was the size of 10 lion’s paws. People stayed far away from these fearsome creatures, but after a while, some of the mountain horses gave birth to the children of griffins; so it was the hippogriff was born. Though their bodies were like those of a horse, their wings, claws, head, and strength were like those of the griffin. Before long the hippogriffs began to stray from home, flying across the sea, haunting the mountains everywhere throughout the world.

When the hippogriffs appeared in the Pyrenees, the magician used his magic to tame one, and after that, those who had before feared the magician feared him still more. No one visited his faraway castle, but people often spoke of his power and magic.

One day a valiant knight named Rogero decided he must see this magical kingdom. When he arrived at the castle, the magician was entranced by the young man’s courage. He decided he would make Rogero his foster son.

Rogero was pleased by this notion, for he hoped to learn magic, and the magician, happy to have both a companion and a son, was eager to teach all he knew.

“Dear son,” the magician began, “before I begin your lessons, I must know your future.” But when the magician read Rogero’s future, he was distraught. Rogero, he foretold, would fall in love with a beautiful young woman, one of the bravest female knights, Bradamante by name. And when Rogero fell in love with Bradamante, he would leave his foster father.

“This must not be,” the magician cursed. To make sure that he would never lose Rogero, he locked him in a tower and forbade him to escape.

In Spain, the brave Bradamante learned from a fortune teller that it was heaven’s will that she marry a handsome young knight named Rogero. Discovering that Rogero lived with the magician in the Pyrenees, she at once mounted her horse and set off to find him. She took along her magic spear, for with that she knew she would come to no harm. Bradamante’s spear unhorsed all knights.

As Bradamante approached the castle gates, the magician called to her, “Come no closer, maiden. We want no one here. Go away.”

“I want to meet the knight Rogero,” Bradamante called. “I challenge you to a duel.”

The magician laughed. He had no wish to battle a lovely young woman, but he knew he would not have to fight, for he carried his magical shield that blinded all those who looked at it. And so he mounted his hippogriff and rode out to meet this proud and haughty woman.

As the magician approached Bradamante, he fell from his hippogriff, for her spear’s magic was strong. Bradamante, knowing the magic of the shield, looked away, but she was very wise, and so she pretended the magician’s shield had blinded her. “I can’t see,” she cried, and the magician walked to her side, confident that if he promised to return her sight, she would leave the castle. Then he and Rogero could live in peace.

“I am coming close,” he said as he approached her. When he was at her side, Bradamante drew her spear and placed its tip on the magician’s chest. “Take me to Rogero,” she commanded.

The magician, frightened of her power, led her to the castle and opened the gates to the tower where Rogero was trapped. “Come with me,” Bradamante said to Rogero, holding out her hand. Captivated by her beauty and her courage, Rogero at once followed her.

Together, they ran out of the castle gates. As they dashed down the pathway, they passed the hippogriff.

“We’ll take him,” Rogero cried, for he had no horse, and so, without thinking and before Bradamante could warn him and give him her spear as protection, he leaped upon the hippogriff’s back. “I’ll ride him …,” he began, but before he could finish speaking, the hippogriff raised his wings and soared into the sky.

Down below, the heartbroken Bradamante called out to her beloved, but try as Rogero did, he could not control the creature.

The hippogriff flew like the wind, soaring through the cloudless sky, heading back toward his homeland. Over the seas, they soared, and over mountains, nearly halfway around the world. At last, after many failed tries, Rogero learned how to guide the hippogriff, and just before they landed in Scythia, he turned the creature around, and they began to fly back to Bradamante.

They flew for many days and traveled thousands of miles, but the magician had read the future correctly. Bradamante and Rogero were destined to be together, and at last, Rogero returned to his beloved. Together they lived for many years in happiness, the hippogriff their faithful guide and servant.

In the 16th century, the Italian poet Lodovico Ariosto wrote “Orlando Furioso,” an epic poem of 45 cantos; the story of Rogero and Bradamante is, in part, adapted from that poem, though other elements of the tale are adapted from many other sources, including John Milton, and Spanish, Russian, French and Italian tales of griffins and hippogriffs. In “Orlando Furioso,” Bradamante is Charlemagne’s niece, and Rogero becomes, ultimately, king of Bulgaria.