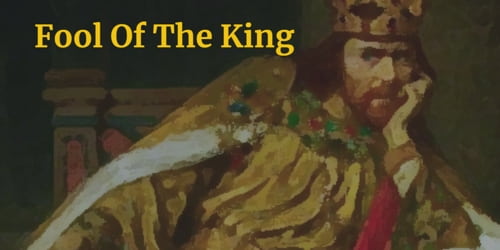 Fool Of The King

Long ago there lived a king. Writers, poets, and musicians came from many places to see him. The king liked to hear their stories, poems, and music. But there was one man whom the king liked better than the others. His name was Mahamood. He knew many tricks, sang funny songs and danced well. He could make the king laugh and the people called Mahamood the Fool of The King. There was one thing that the king did not like in Mahamood. He ate very much. This little man ate from morning till night.

The king thought, “My poor Mahamood will die soon if he eats so much.”

“Oh, yes, my King, that’s right. He is too fat,” said one of the ministers. So the next day there was no place for Mahamood at the king’s table. He went to the wall and stood there. He thought, “I shall wait. Soon the servants will bring me food and drink.”

But the servants did not bring him anything. He did not ask for food, because he was afraid of the king.

“If a man makes the king angry, that man will die,” he thought.

Poor Mahamood was very hungry. Then one of the servants dropped a little piece of bread. Mahamood quickly picked it up. “Now I have something to eat,” he thought. “I shall eat it when the king is not looking at me.”

When dinner was over, the poets read their poems, the musicians played and the dancing girls began their beautiful dances.

“Now the king is watching the dancing girls,” thought Mahamood, “I shall eat my piece of bread.” But the king was watching Mahamood all the time. He asked the musicians to stop, called Mahamood to come to him and asked, “I hear that you have a donkey. Where did you get it?”

“I bought it in Tripoli, my King!” answered Mahamood. “Oh, I see,” said the king.

So the musicians were playing and the girls were dancing. Then Mahamood wanted to eat his piece of bread. But the king asked him to come nearer and said.

“How much did you pay for your donkey in Tripoli?”

Mahamood put the bread in his pocket quickly and answered. “Sixteen gold coins, my King.” The king went on like this all afternoon.

When Mahamood tried to eat his piece of bread, the king always asked him a question. At last, evening came. Mahamood could not stand. He was so hungry and tired. When the feast was over, Mahamood ran to the kitchen, but the kitchen was locked and Mahamood had only his small piece of bread to eat. He ate it up and went to his room. But he could not sleep. He was very hungry.

Then he ran to the king’s room. He knocked at the door. The king asked angrily, “Who is knocking at my door so late?”

“Oh, my King,” said Mahamood. “I am sorry, but I must tell you that I did not buy my donkey in Tripoli, but in Benghazi.”

The king thanked him and told him to go away.

A few minutes later Mahamood knocked at the door again. “Oh, my King, but I told you a lie this afternoon. I did not pay sixteen gold coins for the donkey. I paid twenty gold coins for it.”

“Oh, you fool,” cried the angry king. “I shall cut off your head for your silly tales about the donkey and give your body to the jackals!”

Mahamood listened to the king and smiled: “Oh, yes, I know that. But before I die may I say my last wish? Only one wish!”

“What is your last wish?” asked the king.

“My last wish is to have a good supper.”

The king understood everything. He laughed and told his servants to bring the best food to his room. He sat down at the table with Mahamood. They ate and laughed until morning came. After that Mahamood was never without food. And he was always happy.