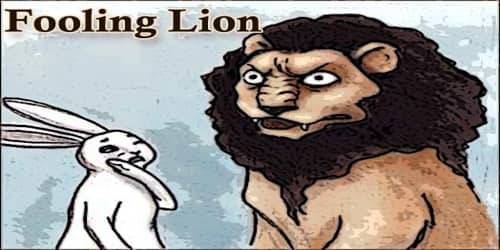 And then one day as Lion bragged, Rabbit twitched his nose.

“Why are you twitching your nose?” Lion roared. “Are you saying you don’t believe me? Is that what that twitching means?”

The other animals gasped at Rabbit’s nerve, but Rabbit slyly winked at them.

“What’s that?” Lion growled. “Who could possibly be mightier than I?”

“Well, you’re mighty, that is true,” Rabbit said. “But you’re not the mightiest.”

“How dare you insult me,” roared Lion, but he was curious now. Who could Rabbit possibly mean? And so he asked, “Who? Who is mightier than I?”

“Mr. Hunger,” Rabbit quickly answered. The other animals, beginning to catch on, nodded, but no one said a word.

“Lucky Lion, then,” Rabbit said. “Of course, if you had ever met him, you wouldn’t be here today.”

“He’s larger than I,” added Elephant.

“And I,” Hippopotamus cut in.

“Yes,” said Rabbit, “he is larger than all of us put together.”

Lion’s jaw dropped. “He is? Well, he is surely not as strong as me.”

But Lion laughed. “Take me to see this Mr. Hunger. I don’t believe a word you say, so you’ll have to show me.”

“I demand that you take me there,” Lion growled.

“Surely someone knows how to find him if he’s so large and mighty,” said Lion. “Someone must know how to find his home.” All the other animals turned and whispered to each other and shook their heads and shrugged. Then one said, “We’ll have to look.”

“Yes,” Rabbit agreed. “We’ll look around, and we’ll get back to you next week.”

Rabbit smiled. His plan was working well so far.

A week later they met at the same place. “Are you ready to take me to Mr. Hunger?” Lion asked.

“Yes,” said Rabbit. “Just let me jump on your back and I’ll give you directions.” And off they went.

“Mr. Hunger lives in a hole in the ground,” Rabbit said as they walked. “Just turn left here, now right, and straight ahead.”

They traveled on until they came to a hole in the ground that was covered up by huge logs. Beside it lay a heavy, flat stone.

“Elephant has opened the door to Mr. Hunger’s house,” Rabbit said. “This way you can go right inside and wait for Mr. Hunger to return.”

“But won’t Mr. Hunger see that his door has been moved? He’ll know I’m inside, and that will give him the advantage over me,” Lion argued.

“Never fear,” said Rabbit. “Elephant has agreed to put the stone back as it was after you’ve climbed inside.”

“Oh, what a friend you are to me,” Lion said gratefully. “You’ve thought of everything. And please thank Elephant for me, too.”

So Lion went down into the hole, and Elephant pushed the stone and logs back in place.

The next day, Elephant passed by and looked down into the hole. “Yoo-hoo,” Elephant called. “Mr. Hunger, are you home?”

Two weeks passed, and at long last Rabbit came by and looked down into the hole. The lion was lying down, too overcome with the hunger to stand.

“Hello, Lion,” Rabbit called. “How are you down there?”

Lion’s voice was very faint. “I’m waiting …” he began, and then Rabbit saw the light in his eye as he began to understand who Mr. Hunger was.

“You believed you were stronger than Mr. Hunger, didn’t you?” Rabbit taunted.

“You betrayed me with a lie, Rabbit,” Lion called out weakly. “You turned my own vanity on me.”

“That I did,” Rabbit said, “and who then is the mightiest of the jungle?”

“Mr. Hunger is,” Lion answered. “I see that Mr. Hunger is bigger and more powerful than all creatures put together.”

“And have you learned a lesson, then?” Rabbit called. He could barely hear Lion’s whispered “yes.” Now satisfied that Lion had indeed been humbled, Rabbit enlisted Elephant to move the stone and help Lion out of the hole.

And never again did Lion brag that he was the mightiest creature on the plain.