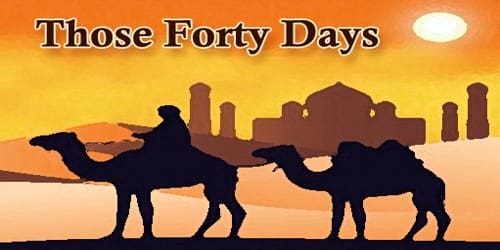 Once an Arab cloth merchant named Ajab was going on a voyage along with his friends. They were enjoying the journey, eating, drinking and dancing all the way. All of a sudden, a storm arose in the sea. It destroyed the ship totally. All my friends were drowned but Ajab. He managed to swim to the shore. He was exhausted and tired. Besides, he was hungry. He searched for food but found nothing. He back to his country.

After some time, he heard some noise coming from the seaside. He saw that a ship was coming closer. He thought that the ship may have pirates or even man-eaters. So he quickly hid behind a tree to save his life and to keep a watch on the movements of the strangers.

The ship stopped on the seashore. Some slaves descended from the ship. They had spades with them. They moved ahead and dug a pit. Then they brought big baskets from the ship and descended into the pit. They were going down and coming up by the steps they had made. Ajab was surprised to see their strange activities. Then the slaves went away. An old man along with an eight-year-old boy came and entered the pit.

Ajab was thinking, ‘Who are these people? Why have they come here? What are they doing inside the pit?’ While Ajab was thinking about this, the old man came out of the pit, but he did not have the little child with him. He went away without the boy. Before they left they covered the pit. All this made Ajab more suspicious about the intentions of the people. He thought, ‘It appears that these people have buried the child alive.’

He thought of saving the child. So he quickly removed the mud from the pit and descended the steps. There he saw a door. He opened and went inside. Some candles were lit there. He saw baskets full of food items and the boy was playing chess.

Seeing the stranger, the boy was frightened. He hid behind the bed and started at Ajab. Seeing the boy frightened, Ajab comforted him, “You need not be afraid of me. I want to help you. Tell me who these people were and why did they leave you here.”

Now the boy felt some relief and said, “My name is Haroon. My father’s name is Rashid. He is one of the richest jewelers of Baghdad. I am the only son of my father. I was born by the blessings of Pir Baba. But Pir Baba has told me that I will have a shortage. The eighth year of my life will prove very dangerous to me. My father consulted a number of fortunetellers and astrologers who all told that my age would be very short. All this has upset my father. He wanted to find a way to save to my life.” One of the astrologers told my father, “There is a danger to the life of your son from a person named Ajab. If you could save your son during his eighth year from Ajab, your son would have a long life.” The boy continued, “My father has hidden me here so that Ajab could not do any harm to me. I am going to complete my eighth year after forty days. Thereafter, I will be able to live longer.”

Hearing the boy, Ajab thought, ‘Why would I kill this innocent boy? The boy is so lovely that anybody will love him. The astrologer must be wrong.’

Haroon asked him, “Uncle, you have not yet told about yourself. Who are you? From where have you come?” Ajab said, “I am a cloth merchant. I was going for some business.” Thus, Ajab told about himself. But he did not tell his name. He had decided to prove the astrologers wrong.

He said Haroon, “My son! You need not be afraid of anyone. I am here to protect you. Now it is my responsibility to save you from all dangers. So far as I am here, nobody can harm you.”

The words of the stranger made Haroon very happy. He became fearless. Soon he mingled with Ajab and started addressing him as his uncle.

Ajab took great care of Haroon too. He played with him and even told him stories to entertain him. They ate, played and slept together. This way, they spent thirty-nine days happily with each other. Now only the fortieth day was left to pass the deadline of the danger.

On a fortieth day, Ajab helped Haroon to get ready. Both had breakfast together. They played chess all day. When it was evening, Haroon felt hungry. He asked Ajab to give him something to eat. Ajab said, “Wait, I will bring a watermelon for you.” He picked a watermelon from one of the baskets and asked for the knife. Haroon pointed to the shelf near his bed. As Ajab was trying to pick the knife, a scorpion stung in his foot. Out of pain he dwindled and fell on Haroon. The knife struck the palm of Haroon who cried in pain. Ajab quickly got up and bandaged Haroon’s wound. Tears welled up in his eyes.

Seeing Ajab weeping, Haroon asked him, “Uncle, I am crying out of pain, but why are you crying?”

Ajab replied, “These are the tears of happiness. I had not told you that I am Ajab. Your father hid you here because of me. But I had decided on that very day to protect you at any cost. Had you been killed by the falling of the knife, who would have told your father how we had spent these forty days.”

Haroon hugged his uncle and cried in happiness.

At this moment, they heard the sound of steps as if some people were coming there. Soon Haroon’s father appeared along with the slaves. Haroon rushed to his father and hugged him. He told his father everything about Ajab and his father hugged Ajab and thanked him.