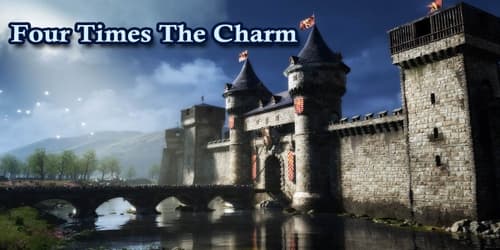 Once upon a time, in a castle on the banks of a river, there lived a hunchback. He was fabulously wealthy, but his heart was hideous, and he was an angry, spiteful man.

Sad to say, one day the hunchback fell in love with the daughter of a poor peasant, and he decided he would marry her. Because he was so wealthy and powerful, he had his way. When he had married the girl, he took her to live in his castle, and from that moment on, he was consumed with jealousy. To keep her to himself, he never let her see another soul.

He allowed no one to enter the castle, and he let his wife go out only when he accompanied her. So the months passed, and the girl grew more and unhappy with her plight. It seemed, though, that nothing would save her.

One day three minstrels came to the castle. The three men were hunchbacks too, but they had not allowed their deformity to sour their cheerful natures. “Hello, friend,” they said. “We’ve come to play for you, but we would welcome some refreshment, please.”

Amazingly, the hunchback let the men into his home, for he did not worry that his wife would be attracted to any of them. Still, when they had finished eating, he sent them away. The three minstrels set off down the road. When they were gone, the master went to town on business.

The poor lonely wife waited until her husband was out of sight, and then she opened her window and called to the minstrels, who sat daydreaming upon the riverbank. “Please come back,” she cried. “I would love to hear some music today.”

The minstrels, feeling sorry for the poor lady, returned to the castle. She offered them wine, and they began to play and sing. After playing several merry songs, they stopped to drink, and suddenly, they all heard footsteps approaching the back door.

“Oh no, it is my husband,” the lady cried. “Quick, follow me,” and she led the three men upstairs to a room where, luckily for her, three empty coffins stood. “Climb into these and hide,” she instructed the men. And then she went downstairs and greeted her husband. “Have you come to spy?” she asked him when he stormed through the door. He blushed, for so he had.

“You’re certain?” he asked, sniffing the air. And he began to search this way and that, but his wife steered him clear of the room with the coffins.

After he had searched a while, he again set off for town. “I shall return shortly,” he said.

Now the lady ran to release the minstrels from the coffins. To her dismay, she discovered they had fallen asleep, so deeply asleep, in fact, that she couldn’t wake them. Now, what would she do? She had to find some way to get rid of them before her husband returned.

She looked out the window and saw a peasant lad passing by, and she had a sudden flash of inspiration. “Please come up here,” she called to the boy. “I have a reward for you if you will help me.”

The peasant lad came to the door, and the lady pointed to the first coffin. “Inside there is a body. Please take him to the river and toss him in,” she said, “and I will pay you a thousand gold coins.”

“So I will for you, dear lady,” the lad said, and he asked for a sack. He put the sleeping body of the first minstrel in it, walked to the river, and pitched the body into the water. He returned to claim his reward.

The cold water shocked the first minstrel awake, as the lady knew it would, and he swam to the riverbank and ran away as fast as he could, confused and terrified by this turn of events.

Back at the castle, the lady met the lad at the head of the stairs. “I would reward you,” she said, “but look here! You’ve not done what you said you would,” and she showed him the coffin. She had moved the sleeping second minstrel into the first coffin by then, and the lad scratched his head. “Oh my,” he said, “well, here I go then.” Once again he placed the sleeping body in the empty sack, and once again he walked to the river and tossed the body from the sack into the water. He returned to the castle to claim his reward.

Of course, the second minstrel reacted as the first one had, and he swam to the riverbank and took off into the woods.

By the time the lad reached the castle, the lady had moved the third minstrel into the first empty coffin. Once again she took the boy to task when he asked for his reward.

“He’s a great sorcerer,” the lady said, “so you must be sure he is truly in the river.” And so, summoning his strength, the lad lifted the third minstrel from the first coffin, placed him in the sack and set off for the river again.

This time he tied a stone to the body. “You will sink for the last time, you sorcerer, you!” and he threw the body into the water. Then he turned back toward the castle.

The third minstrel found himself sinking to the bottom with the weight of the stone, but he freed himself, swam to the bank, and stumbled into the woods, trembling with fear and as groggy from sleep and wine as the first two had been.

As the lad was walking back to the castle, he saw the hunchbacked master returning from his journey to town.

“What’s this!” cried the lad. He had had enough of the hunchback’s tricks. He jumped upon the man and, using all his strength, stuffed him into his sack, dragged the sack back to the river, tied a few big rocks to the sack and dumped the whole thing into the river. He waited until it touched bottom, and then, sweating and out of breath, he ran back to the castle once more.

“I dare say you’ve not seen him again, have you?” he asked the lady when she came to the door.

“Ahh, thank heavens,” the boy said. “He was nearly at your door, returned from the river, but I stopped him once and for all, of that I am sure.”

Now the wife knew her plan had worked, and she paid the peasant handsomely. When the boy was gone, she locked the castle door behind her and returned to her father’s home.

Everyone always wondered what had become of the hunchback, but nobody missed him, or so the story goes.