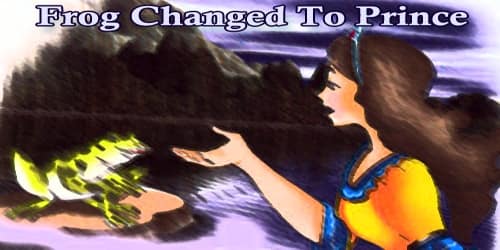 Once upon a time, there was a king who lived in a beautiful palace that stood near a forest. He had several beautiful daughters.

There was a lake at a distance from the palace. During the summer, the youngest princess used to seat near the lake and sometimes would play there with a golden ball.

One day while she was playing with her ball, the ball fell into the lake. She started crying. Seeing the princess weeping, a frog who was present there, said to her, “What’s the matter? O, princess! Why are you crying?”

The princess was surprised to hear the voice. She looked here and there. Then her eyes fell on a frog who was peeping out of the lake water. The princess said, “O frog, see, my ball has fallen in the lake. How can I get my ball back? Please help me in getting the ball out.”

The frog laughed and said, “Oh! This is what you are crying for. Now stop weeping. I will certainly help you.”

Then he thought for a while and said, “But tell me what you will give me in exchange for bringing the ball out of the water.”

The princess said, “Dear friend, I am ready to give you anything. You may ask for jewelry, pearls and even my golden crown in exchange for the golden ball.”

The frog replied, “Dear princess, I do not want any of these things. I only want your true friendship. I want to share your lunch and dinner and want to be a good friend of yours. If you agree to make me your friend, I can bring your ball out of the water.” The princess readily agreed and said, “I accept your proposal. Now please go quickly and bring my ball.”

She was very eager to get her ball back. ‘The frog is mad that’s why he wants to make friends with me,’ she thought.

Meanwhile, the frog took a dip and brought the ball out of the water. As she saw the ball, the princess jumped out of joy. She picked it up and ran to the palace. The frog also followed her and said, “Wait, dear princess! Take me with you as you have promised. I cannot run as fast as you.” But the princess ignored the frog. She reached the palace and forgot her promise to the frog.

The next moment someone knocked at the door and said, “O princess! Please open the door. I have reached here after so much trouble.”

On hearing the voice, the princess rushed and opened the door. The princess was surprised and frightened when she saw the frog. She quickly closed the door and went back to the dining table.

Seeing his daughter disturbed, the king asked her, “What is the matter? Is there an enemy at the door or has anyone tried to harm you?”

The princess said, “No father! There is neither an enemy nor anyone who has tried to hurt me. It is an ugly frog who is trying to enter the palace.”

The king asked, “Why has the frog come here?” The princess narrated all that happened the previous day at the lake. She also told the king that she had promised to make the frog her friend in exchange for getting the ball back. At this moment, the frog again knocked at the door. The king said, “Dear princess, do not break your promise. Bring the frog inside with due respect.”

Then, the princess, let the frog enter the palace. The frog said, “Let me sit on the chair beside you.” The king said to the princess, “Dear, do what the frog is saying.”

The princess gave a seat next to her. Then she offered the plates of dishes as desired by the frog, which he ate to his satisfaction. But the princess could not eat properly. After the dinner, the frog expressed his desire to sleep and asked the princess to take him to her bedroom.

Then the princess became nervous. She cried, “How can an ugly-looking and dirty frog sleep with me?”

But her father said, “Dear, never break any promise. If someone helps you in your distress, you should not forget his obligation. It is not fair to forget the help which he had rendered to you in your bad time.”

The princess had no other mean but to take the frog to her bedroom and went to her bed to sleep.

At this stage, the frog whispered to the princess, “Take me to your bed, otherwise I will complain to your father.”

The princess lost her temper and in a fit of anger, she picked the frog up and threw him on the wall. But as soon as the frog hit the wall, he changed into a handsome prince. Seeing the prince, she cooled down and fell instantly in love with him.

Then the prince told her his story how he had been cursed by a witch. “O princess, pardon me. I behave rudely because that was the only way left for me to come of the course,” the prince added. Soon they got married and the king blessed them. Thereafter, the prince went to his kingdom taking his bride with him.