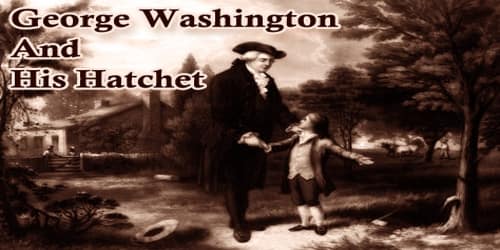 George Washington And His Hatchet

When George Washington was quite a little boy, his father gave him a hatchet. It was bright and new, and George took great delight in going about and chopping things with it.

He ran into the garden, and there he saw a tree which seemed to say to him, “Come and cut me down!”

George had often seen his father’s men chop down the great trees in the forest, and he thought that it would be fine sport to see this tree fall with a crash to the ground. So he set to work with his little hatchet, and, as the tree was a very small one, it did not take long to lay it low.

Soon after that, his father came home.

“Who has been cutting my fine young cherry tree?” he cried. “It was the only tree of its kind in this country, and it cost me a great deal of money.”

He was very angry when he came into the house.

“If I only knew who killed that cherry tree,” he cried, “I would yes, I would”

“Father!” cried little George. “I will tell you the truth about it. I chopped the tree down with my hatchet.”

His father forgot his anger.

“George,” he said, and he took the little fellow in his arms, “George, I am glad that you told me about it. I would rather lose a dozen cherry trees than that you should tell one false-hood.”