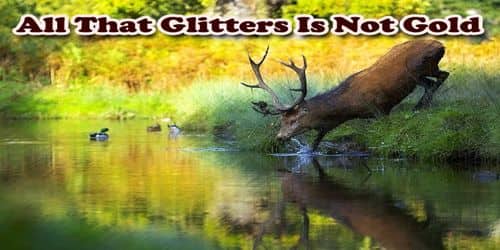 All That Glitters Is Not Gold (Story)

One day a stag was thirsty. Ile went to drink water in a pool. While drinking water he saw his reflection in the water. He was very charmed to see his horns. He thought, “Allah is very kind. He gave me such a pair of beautiful horns.” He praised them much. He felt proud of them. Then his sight went to his legs. He became upset to see his legs as they were thin and ugly. Then he scolded Allah for giving him such legs and went away from there.

After a few moments, a hunter came up in the jungle. All the animals started running to save their lives. The stag could not understand what would be happening. He found that all the animals started running to save their lives as soon as they saw the hunter coming towards them. When he realized, it was too late to escape. He was frightened to see the hunter coming. In order to save his life, he started running. His ugly legs helped him to run fast. He was trying to run as fast as he could. Unfortunately, his horns got entangled with the creepers in the bushes. He had nothing to do.

All of a sudden, he fell down and was wounded and could not get up. Then the hunter came close to the stag and killed him. Had the stag, not the horns, he might not have been killed.

Moral of the story: ‘All that glitters is not gold.’