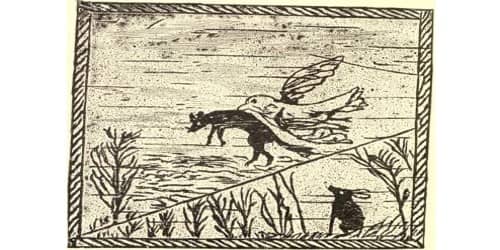 Glooscap is a spirit, a medicine man, a sorcerer. Glooscap created all the animals. He made them be peaceful and useful to humans. The first squirrel was as big as a whale, but when the squirrel destroyed a strong maple tree, Glooscap made him smaller. The beaver, too, was enormous, but when his first dam flooded the world, Glooscap made him smaller, too. The first moose was so tall he reached the sky, but he trampled everything in his path, and so Glooscap tapped him on the back and made him closer in size to man.

Glooscap can do anything, but sometimes he tires of helping his people. When he is tired, he paddles off in his magic white canoe and disappears in the misty clouds. But he never abandons his people for long.

One day long ago the rains stopped, and the people’s world turned dry. It stayed dry through the summer and early autumn. The crops withered and died. The people did not know what to do, and so they sent a man to the source of a spring way up north.

The man walked for a month until he came to a village. The people there were not like humans. Their hands and feet were webbed from living in swampy land. When the man asked about the water, they told him to speak to their chief, who lived still further north.

After many days, the man arrived at the home of the chief, and he shook when he saw the monster chief with his warty, bloated body. The chief grinned, and when he did his yellow eyes bulged from his head. He was so big he filled the whole valley, and the man saw that the chief had dug himself a huge hole and dammed it. All the water in the world was trapped in the chief’s hole.

“Little man,” the chief asked, “why have you come?”

The man explained his people’s plight, but the monster chief blinked at him and laughed. His laughter sounded like a hiccup. “I don’t care if you need water. I want to keep all the water for myself.”

“But my people are dying of thirst,” the man pleaded.

“Go away or I’ll swallow you up,” the monster bellowed. He opened his mouth wide and the man saw inside all the creatures the monster had swallowed. The monster smacked his lips, and the man turned and ran.

Back in his village, he told the people what had happened. The people cried out in despair, but Glooscap sees everything with his inner eye and knows everything that happens in the world. And when he saw this, he knew he had to set things right.

Glooscap readied himself for war against the monster chief. He painted his body with paint as red as blood, and he made himself 12 feet tall. He placed two clamshells on his ears, and put 100 black eagle feathers and 100 white eagle feathers in his scalp lock. He painted yellow rings around his eyes and twisted his mouth into a snarl. When he was finished he stamped the ground. The whole world shook, and Glooscap let out a war cry.

The people looked up into the sky, for when Glooscap cries, the sound echoes from the mountaintops and shakes the valleys. Glooscap grasped one mountain in his hand, and from this, he cut a single knife, sharp as a bear’s tooth. He strode forth toward the monster chief’s home, mighty eagles circling him as he marched.

“Go away!” the monster shouted when he saw Glooscap.

“You are an ugly, fat old lump of mud,” Glooscap roared.

Infuriated by the insult, the monster chief began to fight Glooscap. The mountains trembled; the earth split wide open. The monster chief’s swamp burst into flames. Huge trees splintered. The monster opened his mouth to swallow Glooscap, but Glooscap made himself so much taller than even the monster’s huge mouth was too small for him. Glooscap slit open the monster’s belly, and from this wound gushed a mighty roaring river that tumbled and foamed, rolling down and down, gouging a deep bed. This flood surged through the village and on to the sea in the east.

“That should be enough water for the people now. I will make the rains come later,” Glooscap said. He seized the monster in his palm and threw him into the swamp. When the monster hit the water, he turned into a bullfrog, and that is why the bullfrog, and all his ancestors, have bulging eyes and wrinkled skin and laughter that sounds like a hiccup.