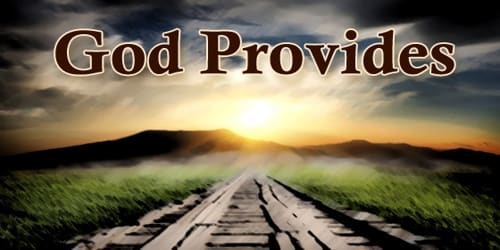 Once upon a time Andhra Pradesh there ruled a very generous King. He was known for his kindness. Every day two beggars would visit the king. One was old and the other was a very young man. When the king gave alms to the older man, the latter would always say, “God provides!” The younger beggar other hand said, “Our King provides!” when given alms by the king. The King got irritated and thought, “The older one keeps saying ‘God provides! God provides!’ when it is I who give him food!”

The next day, he told them to walk down an abandoned lane, one by one, where he had placed a purse filled with gold. He asked the younger man to go first. “Surely when he finds the gold, the other will realize it is I who provides,” reasoned the King. The man walked down wondering why the King had sent him here. “Perhaps he wants me to enjoy the peace of this beautiful road. I should walk down it with my eyes closed!”

As he did so, he missed the purse of gold on the ground. The older beggar walked down next and found the purse.

The King questioned them later. “Did you find anything on the road?” he asked, looking at the younger one. “No your Majesty! But it was a beautiful road!” he replied. “But I did! I found a purse of gold! As I always say, God provides!” said the older one.

The displeased king then called the younger beggar aside. “This is for you,” he said giving him a pumpkin. He had filled it with silver coins, which he was sure the beggar would not miss. “Surely now the older one will realize who provides!” he thought.

As the younger beggar walked down the road with the pumpkin, he wondered what to do with it. “Hmm… I can’t cook it. And I can’t it raw. What will I do with this pumpkin?” he thought.

Suddenly, he caught sight of a shopkeeper. The shopkeeper agreed. “Here are a few coins for it,” he said and took the pumpkin.

The beggar went away happily. “At least I made a few coins from the pumpkin! Our king is so generous!” he thought, praising him.

Soon after, the older beggar walked by the shopkeeper’s shop, begging. “Spare an old man a coin!” he said.

The shopkeeper saw him and felt sorry for him. “After all, I have no use for the pumpkin. Let him have it,” he thought. He called him and gave him the pumpkin.

The older beggar took the pumpkin back to his hut. “I can make something from it,” he thought, taking out a knife to cut it. Much to his delight, he found the pumpkin filled with silver coins! “God provides! God is great!” he thought.

The next morning, the king eagerly waited for the beggars. When they reached, he asked the younger one “Did anything exciting happen to you yesterday?” “No, Your Majesty, but I did earn a few extra coins by selling the pumpkin you gave me! Came the reply.” The King was dismissed. “What about you?” he asked the other one.

“I was blessed! Yesterday, the shopkeeper gave me a pumpkin. When I went home and cut it I found it filled with silver coins! As I always say ‘God provides!”

The King gave up, having learned his lesson.