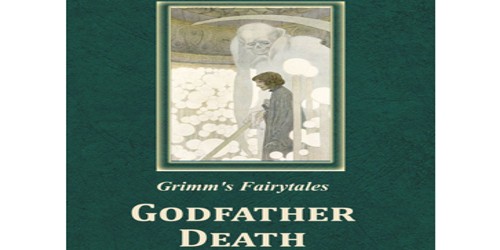 Godfather Death (A Tale Told All Over Europe)

Godfather Death (A Tale Told All Over Europe)

Once upon a time a poor woodcutter and his wife had 12 children. When the 13th child was born, the woodcutter began to search for a godfather who might offer his new son good fortune. Many offered, but no one seemed quite right, and when the day of the boy’s christening dawned, no one had yet been chosen.

“We have no godfather for our child,” the woodcutter’s wife said to her husband. Just at that moment, they heard a knock on the door.

When the woodcutter opened it, he saw a withered man with skin so pale he seemed skeletal. The man wore a long white robe and carried a scythe. “I am Death,” the old man said in a shaky voice. “I wish to serve as your son’s godfather. I make everyone equal.”

The woodcutter looked closely at the man. “Yes,” he said softly. “It is true. Death takes rich and poor alike.”

“I promise your son good fortune in return for his respect,” Death said.

“That is fair,” the woodcutter said, and welcomed Death into their home and named him godfather.

When the child was grown, his godfather appeared before him one day. “Come with me now, young man,” Godfather Death said quietly. He took his godchild by the hand and led him into the forest.

“It is time for me to give you my gift,” Godfather Death told the young man. “I am making you a doctor and offering you a chance to give much good to the world. When you visit a patient, I will appear to you. If I stand by the head of the sick patient, you may say you will cure him of his illness.” Godfather Death now showed his godson a field filled with the most wondrous herb. “Give him this herb and he will recover, and only you will know how to find this field.”

The young man was delighted and was about to speak when Godfather Death held up his bony hand. “But, my son, if I stand by the patient’s feet, he is mine. Nothing can save him, and you must tell him that he will die. Beware of using this herb against my will.”

“I promise to respect your wishes,” the young man said.

True to Godfather Death’s word, the young man became a famous doctor. He looked at a patient and knew at once what to do. People from everywhere sought him for a cure whenever any of their loved ones were ill. He was soon admired by all who knew him and held in the highest respect even by those who had but heard of him.

Years passed, and the young man’s fame spread far and wide. One day the king sent for the doctor, and after they had talked for a while, the king appointed the young man to be court physician. Life for the doctor was grand. He fell in love with the king’s only daughter, and they married and lived for many years in great comfort and happiness.

When he arrived, he was alarmed to see Godfather Death standing by the king’s feet.

“Cure me,” the king said, his voice filled with fear. “Surely you can cure me, son. If you do not, you will lose all that you love.”

The doctor closed his eyes and thought long and hard. Surely my godfather will give me one chance, he thought, and without looking into his godfather’s eyes, he turned the king around so Death stood by his head. Then he fed the king a cup of his famous herb tea, and the king was instantly cured.

That very night Godfather Death came to the doctor’s study. “You betrayed me, son,” he said softly. “All is lost.”

“I could not harm the king,” the doctor argued. “He has given me all that I need.”

Their thousands of candles burned in countless rows, but every second, one or another was extinguished and another somewhere else in the cave lit up. The walls were alive with ghosts as the shadows of the flames danced. The doctor stared in fear and wonder at the dancing figures.

“These are the lights of people’s lives,” Godfather Death said.

“Show me my light,” said the doctor. He thought it would be tall, with a great flame rising, but Death pointed to the shortest candle of all.

“Dear godfather,” the doctor cried, “light a new candle for me. Do that for the love of me so that I may enjoy a long life.”

“I cannot,” said Death. “You defied my orders, and the king lived. But one candle must go out before a new one can burn. A child will be born tonight.” He turned and placed a tall, flaming candle on the doctor’s tiny one. The flame of the doctor’s candle immediately died, and the doctor fell to the earth. For no one, not even his godson can cheat Death.