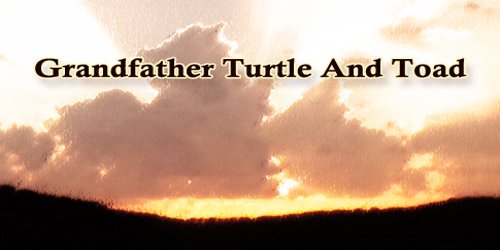 Long ago, in the beginning of time, the world looked very different from the world we now know. Instead of earth, ocean and air, the world was made only of sky and water. Above was sky world and below was water world. In sky world there was wide, blue space as far as the eye could see, and people walked among the clouds. Down in water world, there was only water, swimming with creatures.

One day a girl from sky land went walking, hoping to see something new. She walked for many hours, and after a while, having seen nothing she hadn’t seen before, she grew tired. So she sat down to rest on a bank of clouds, and there she fell into a deep sleep. Some say her sleep lasted for years.

As she slept, she dreamed of a world such as no one had ever seen, a world with forests and mountains, rivers and valleys and wide-open plains.

After she steadied herself, she began to move forward, but she was in a daze and walked as if she were dizzy. “I’m lost,” she said over and over, “I am lost.” She stared up and down, and suddenly she tumbled right out of sky world.

Down, down, down she fell, turning somersaults in the space between two worlds. As she fell, she could see the world of water down below. She screamed with all her might, for she could not swim.

“Help!” she cried, “I will drown in water world!” She tried desperately to claw her way back up to sky world, but by then she had fallen too far. Wild winds tossed her this way and that.

Just moments before she reached that endless deep blue water, two swans heard her cries for help. They lifted themselves out of the water and flew toward the tumbling girl. They spread their wings so that, when joined, they served as a net, and before the girl reached the water, the swans caught her.

Now each swan, using one wing to hold her, lightly fluttered its other wing, holding the frightened girl just above the water. Then they looked at each other, unsure what to do.

“We mustn’t let her fall into the water,” said the first swan. The second agreed, but added, “I haven’t the strength to toss her all the way up to sky world.”

“What will we do?” they asked in unison.

“Don’t you have a wise one?” asked the girl, relieved to have been rescued but uneasy in the new world around her. “Surely someone must know what to do to save me.”

Still holding the girl in the hammock of their wings, the swans traveled to Grandfather Turtle’s home. And naturally, because he was so wise, the moment he saw the girl lying in the cradle of the two swans’ wings, he understood the problem they had.

For a time he pondered, letting thoughts run through his mind. No one wished the girl to suffer. All the creatures of the sea gathered around to help him with his plan, but nobody dared speak until he did. While Grandfather Turtle was thinking, everyone waited quietly.

At last, Grandfather Turtle spoke. “The girl will rest upon my back,” he said calmly, and the two swans, grateful for his help, placed the girl there.

“And now?” everyone asked.

“Someone must dive down to the very bottom of our world,” Grandfather Turtle said. “Down, down, way deep down, there is soil and sand. Someone must bring this to the surface and place them upon my back. And that is where this girl shall live.”

Beaver at once said, “I’ll go. I’m a very good builder.” But Otter interrupted him and said, “No, I shall do this.” Muskrat laughed and nudged them both aside, saying, “This is a job for me.”

“You will all help,” said Grandfather Turtle. He was very judicious.

One after the other, Beaver and Otter and Muskrat dived.

The other creatures of water world sighed with relief, but just as they did, up popped little brown Toad. “I’ll help, too,” he squeaked.

Everyone laughed. Everyone, that is, but Grandfather Turtle. He looked directly into little Toad’s eyes and said, “Do you think you could?”

“Of course I can,” little Toad answered, and down he dived.

Moments after he was gone, Beaver and Otter and Muskrat bobbed out of the water; they were panting and gasping for air. But they had no soil or sand with them.

Everyone sighed, disappointed, but just as they did, little Toad appeared, carrying a load of soil that he put right on Grandfather Turtle’s back. “There’s the first load,” he said.

All the creatures stared in disbelief, and then couldn’t believe their eyes when little Toad dived back down. Again and again he returned carrying soil, and again and again, he dived for more.

Finally, the little girl had plenty of soil and sand to stand upon, to walk upon, to live upon.

“It is Earth,” Grandfather Turtle said, naming the place.

Toad never surfaced again. Some say he drowned; others say he died of exhaustion, but all agree that little Toad must be honored forever.