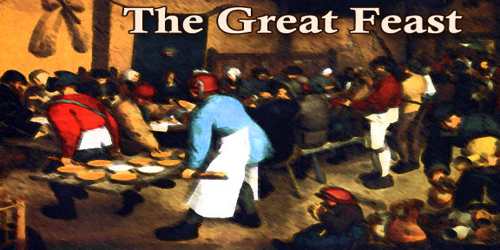 ‘NCE’ the Play Angel came into a nursery where four little children sat on the floor with sad and troubled faces.

“What is the matter, dears?” asked the Play Angel.

“We wanted to have a grand feast!” said the child whose nursery it was.

“Yes, that would be delightful!” said the Play Angel.

“But there is only one cookie!” said the child whose nursery it was.

“And it is a very small cookie!” said the child who was a cousin, and therefore felt a right to speak.

“Not big enough for myself!” said the child whose nursery it was.

The other two children said nothing because they were not relations; but they looked at the cookie with large eyes, and their mouths went up in the middle and down at the sides.

“Well,” said the Play Angel, “suppose we have the feast just the same! I think we can manage it.”

She broke the cookie into four pieces and gave one piece to the littlest child.

“See!” she said. “This is a roast chicken, a Brown Bantam. It is just as brown and crispy as it can be, and there is cranberry sauce on one side, and on the other a little mountain of mashed potato; it must be a volcano, it smokes so. Do you see?”

“Yes!” said the littlest one; and his mouth went down in the middle and up at the corners.

The Play Angel gave a piece to the next child.

“Here,” she said, “is a little pie! Outside, as you see, it is brown and crusty, with a wreath of pastry leaves round the edge and ‘For You’ in the middle; but inside it is all chicken and ham and jelly and hard-boiled eggs. Did ever you see such a pie?”

“Never I did!” said the child.

“Nowhere,” said the Angel to the third child, “is a round cake. Look at it! The frosting is half an inch thick, with candied rose-leaves and angelica laid on in true-lovers’ knots; and inside there are chopped-up almonds, and raisins, and great slices of citron. It is the prettiest cake I ever saw and the best.”

Then the Angel gave the last piece to the child whose nursery it was.

“My dear!” she said. “Just look! Here is an ice-cream rabbit. He is snow-white outside, with eyes of red barley sugar; see his ears and his little snubby tail! But inside, I think you will find him pink. Now, when I clap my hands and count one, two, three, you must eat the feast all up. One two three!”

So the children ate the feast all up.

“There!” said the Angel. “Did ever you see such a grand feast?”

“No, never we did!” said all the four children together.

“And there are some crumbs leftover,” said the Angel. “Come, and we will give them to the brother birds!”

“But you didn’t have any!” said the child whose nursery it was.