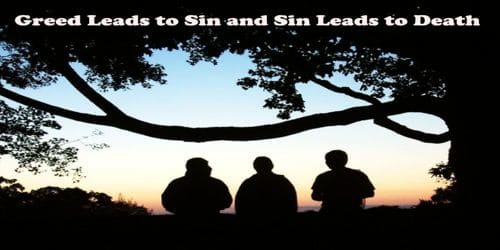 Greed Leads to Sin and Sin Leads to Death

Once upon a time there lived three friends in a certain village. One day they set out on a long journey on foot. They promised to help one another and to be helpful and when any problem arises. On the way, they had to pass through a jungle. All on a sudden, they saw a bag of gold lying on the ground. They became elated with joy and decided to divide them equally into three parts so that they each could get an equal share of the gold coins.

Meanwhile, they got tired and hungry. Through negotiation, they sent one of the friends to the nearby market to fetch some food. While he went for food, the two other friends plotted against him to the effect that he would be killed lest he should be given one-third of the shares.

On the other hand, while going for food, he thought to himself that the food should be poisoned so that he alone could get all of the gold coins. He returned with food mixed with poison. No sooner had he returned than the two other friends got him strangulated to make sure that he died. They felt contented and sat together to eat the food without any least shadow of doubt about its being poisoned. They ate and were poisoned to death. The bag of gold remained to lie on the ground without anybody alive to claim the ownership. It was a great tragedy that there was no owner of the asset who deserved it.