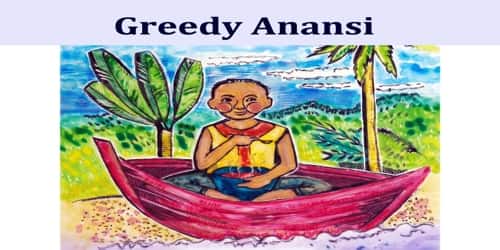 This is a story about a boy. His name was Anansi. There was a great famine in the country where Anansi lived. Anansi and his little brothers and sisters were very hungry. The boy could not think of anything but food.

“This hunger will kill me!” he often said.

One day he went out of the house and walked to the seashore. “I shall try to catch a little fish,” he thought.

He tried again and again. But he could not get the nuts. The nuts were laughing at him! “I’ll get you, my dear nuts!” he said. And he tried again and again to get the nuts. At last, he got one nut. “Now I have you!” he cried. He tried to throw it into his little boat, but the nut fell into the sea. “Well, there are many more nuts in the tree,” said Anansi. But the second nut fell into the sea, too. Seven times that happened. Seven good big nuts were in the sea! The wind carried them far away. The boy cried and cried. But nuts have no ears! They did not come back. Then Anansi went to the forest. He saw a little house there. An old man came out of the house.

“What do you want here, my boy?” asked the old man. “Do not be afraid of me. Tell me everything.”

So Anansi told him about the famine and about his hungry people. Then he told the old man about the nuts and cried again.

The old man took Anansi’s hand and said, “Don’t cry, my boy! I have something for you. It is better than nuts.” He went into his house and brought a little pot. “Take it home and give it to your mother. Now you and your people will never be hungry. When your mother wants to make dinner for her family, she must only say: ‘Pot, pot, what you did for the old man, please do for me!”

Anansi thanked him and went quickly away. He came to the little boat, got in, and said at once, “Pot, pot, what you did for the old man, please do for me!”

And the pot gave him a good dinner. Anansi ate it all and was strong again. He soon came home. But he did not want to give the pot to his mother. “It is my pot. I shall have it and eat when I want to.”

So Anansi put the pot in some dark place of the house and spoke to it when nobody was at home. Every day his mother and his brothers and sisters went out to look for food.

When he was at home alone, he ran to his pot and the pot gave him a good dinner.

Anansi’s brothers and sisters grew thinner and thinner every day. But Anansi grew fatter and fatter.

“Why is he so fat?” one of his brothers asked one day. “I think he has a secret. I shall find it out.”

And the next day he did not go out to look for food with his mother. He stayed at home. Anansi thought that nobody was at home, took his pot and said, “Pot, pot, what you did for the old man, please do for me!”

And the pot gave him a good dinner.

His brother listened to the words. Now he knew about the pot and he told his mother about it. The poor woman began to cry.

That day she told Anansi to go out of the house together with the other children. She stayed at home and asked the pot to give her dinner.

“How happy my children will be when they come home!” she thought.

Anansi came home with the other children. Their mother gave them dinner.

But he did not go to bed. He went to the place where the pot was. But the pot was not there! The next day his mother went to the village square with the pot in the hands. She stopped there and began to beat the pot with a little stick. Many people came to the place. Then she said, “Pot, pot, what you did for the old man, please do for me.”

“He will give me another pot,” he thought.

When Anansi came to the seashore, the little red boat was there. He got into it and soon he came to the old man’s house. The old man listened to Anansi’s story.

“I have no pot to give you, my boy, but I’ll give you this stick. You say the same words to it, only instead of a pot, pot say stick.”

Anansi took the stick and ran to the boat. He could not wait a minute. He said quickly, “Stick, stick, what you did for the old man, please do for me!”

It beat all his fat body! He did not know what to do. He jumped into the water and swam away as quickly as he could. He left the boat with the stick in it. He came home crying like a small child. But he did not tell anybody about the stick. But that was a good lesson for him. People say that now everything he gets he shares with his brothers and sisters and with other people, too.