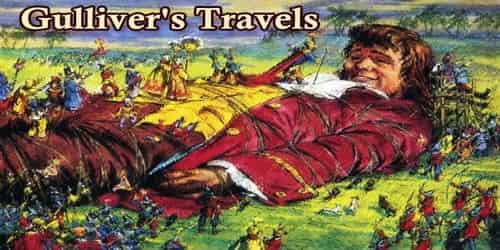 One stormy night at sea, a ship was wrecked. All the passengers on board drowned, except Lemuel Gulliver. Gulliver was an excellent swimmer and swam for many miles before he reached the shore. Gulliver was very tired and decided to sleep. He would look for food after he had had sufficient rest.

Gulliver slept for a whole day. When he woke up, the Sun was beating down upon him. He tried to move, he could not. His hair, hands, legs, and body were tied to the ground. He saw little men running all around him. Someone had got a tiny ladder and was climbing up to him. The little man, no bigger than Gulliver’s thumbnail, came up to his ears and said, “You are in the land of Lilliput; we are Lilliputians. We are taking you to our Emperor, so please do not make any trouble. You will be shot at.” Gulliver almost laughed at this threat but nodded.

It was a carnival atmosphere in which the Lilliputians seemed to be enjoying themselves, much to the amusement of Gulliver.

Finally, they arrived at the Emperor’s palace. The Emperor was there to receive Gulliver, “You are indeed a strange sight. If you are to stay here you will have to be of service to my people here,” he said pointing to the crowd. Gulliver said, “I agree to any condition but only if you untie me.”

Gulliver was freed. He was provided with food and water, a house was built for him. It was a monumental effort by the Lilliputians, who were all out to serve Gulliver. Gulliver stayed with the Lilliputians, helping them with many small tasks.

It so happened, that the neighboring kingdom of Bleuse was not on a very friendly relationship with Lilliput. The King of Bleuse declared war on Lilliput. He took a hundred ships to mount an attack.

The Lilliputians ran to Gulliver for help. The Emperor said, “Don’t let us down now Gulliver; we need your help.” Gulliver walked into the sea. He took a long rope, tied all the hundred ships together and dragged them in the water. Gulliver pulled the ships the whole day until the army of Bleuse was giddy and in no position to fight.

The King of Bleuse came begging for peace between the two kingdoms. The Emperor agreed. Gulliver was hailed as the hero and lived in Lilliput for many years.