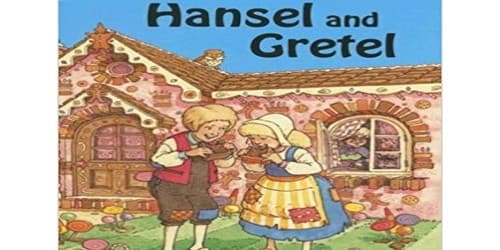 Once upon a time a poor woodcutter and his second wife lived with the woodcutter’s children, Hansel and Gretel. The woodcutter was very poor, and there was so little food in the house that one night his wife decided they must abandon the children in the woods or die of starvation.

The two children overheard their stepmother’s plan. Gretel wept, but Hansel said, “Don’t cry, Gretel.” As soon as his parents were asleep, he slipped outside, and beneath the light of the full moon, he collected bright white pebbles.

The next morning the stepmother woke the children. “Get up, you lazy things. You’re going with your father to chop wood.” The woodcutter was sad, but he had agreed with his wife’s plan. And so they set off into the woods.

When they had gone a little way, Hansel stopped and looked back at the house.

“What are you looking at?” his father asked.

“I am looking at my cat sitting on the roof,” Hansel said, but in truth, he was stopping to drop pebbles from his pocket upon the path.

When they had gone some way, the father built a big fire, and when the fire was blazing, he said, “Now children, you rest here while I go into the forest to chop wood. When I’m finished I will come back to fetch you.”

After waiting many hours, the children fell fast asleep. When they awoke it was dark, and Gretel began to cry. “We’ll never find our way home,” she wailed. Hansel comforted her. “Wait until the moon rises.”

When the moon rose, Hansel took his sister’s hand and the children followed the path of pebbles that shone like silver in the moonlight. They came to their father’s house, and when their stepmother saw them, she pretended to be glad to see them, and cried, “Oh children, we thought you would never come home!” Their father was very happy, for he had grieved at leaving the children alone.

But soon afterward the children again heard their stepmother plotting to leave them in the woods. Hansel went to the door to go outside to collect pebbles, but this time the door was bolted shut. In the morning the children walked into the woods with their father, and because he had no pebbles, Hansel left a trail of bread crumbs in his path.

The woodcutter built a fire and told the children to sleep. They awoke in the middle of the night, and again Hansel comforted Gretel, telling her to wait until the moon rose.

The moon rose, and the children searched for the bread crumbs, but the birds had eaten every one. “Don’t worry, Gretel,” Hansel said, “we’ll find our way.” They began to walk.

The next morning they were deep in the woods when they saw a white bird on a bough singing so sweetly they had to stop to listen. When the bird flew off, the children followed it until they came to a cottage. They gasped, for the cottage was made of gingerbread and candies.

“A feast!” Hansel cried, and reached up to break off a stick of candy, while Gretel licked at the sugary window panes.

Suddenly a voice called from inside, “Tip tap, who raps at my door?”

“The wind,” the children answered, but the old woman who lived inside was no fool. She hobbled outside, and when Hansel and Gretel saw her, they were so afraid they let their candies fall.

“Children,” the woman said sweetly, “come inside and I’ll make you a meal.” This she did, and afterward, she took them to a pretty little room with beds covered in white satin spreads. Hansel and Gretel were so exhausted, they fell at once into a peaceful sleep.

The old woman acted kindly, but she was really a witch who captured and ate lost children. She had a witch’s poor eyesight and a strong sense of smell. “Haha,” she cackled to herself. “They’ll make a fine feast, they will.”

The next morning she took Hansel and locked him in a cage. Next, she shook Gretel awake and forced her to fix her brother a huge meal. “I’m going to fatten him up,” the witch said, “and when he’s good and fast, I’ll cook him.”

Gretel cried, but the witch forced her to do as she said. Every morning the witch called into the cage, “Show me your finger, Hansel, so I can see how fat you are growing.”

Hansel was wise, and so he stretched out a bone instead of his finger. The witch, who could barely see, thought the bone was his finger, and she wondered why he never grew fat. When four weeks had passed and Hansel’s finger was still as thin as a bone, the witch lost all her patience.

“Gretel,” she screeched, “boil the kettle. Fat or thin, I will cook Hansel this morning.”

Gretel cried, but she filled the kettle and made a fire and heated the oven.

“Now,” the witch said, “creep into the oven, dearie, and see if it is hot enough to bake our bread. We’ll have bread with our Hansel.” Of course, she intended to shut the door as soon as Gretel climbed inside, but Gretel was wise, too. “How should I get in?” she asked.

“Fool,” the witch said, “through this opening,” and she stuck her head inside to show Gretel how large it was. Gretel immediately pushed the witch into the oven and bolted the door behind her.

Gretel freed Hansel, and together they gathered every jewel and precious stone and pearl they could find in the house. They filled their pockets and apron with these and walked into the forest again.

When they came to a large lake, Hansel said, “I see no bridge or boat, Gretel. There’s no way to cross.”

But Gretel called out to a passing duck, “Little Duck, Gretel, and Hansel here we stand, won’t you take us back to land?”

The duck carried the children, one at a time, across the lake, and the children walked on until at last, they came to their father’s house. When their father saw them, he wept with joy, for he had not had one moment of happiness since they left. Their stepmother had died of hunger and unhappiness.

Now Gretel shook her apron and Hansel emptied his pockets, and all the pearls and precious stones and jewels fell out. The family’s sorrows had come to an end, and they lived together happily ever after.