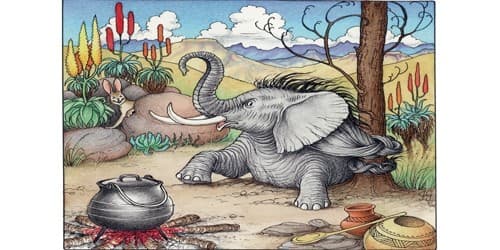 Hare and the Big Pot of Beans

Hare and the Big Pot of Beans (An African Tale)

Once upon a time in Africa, Hare awoke from a dream. In his dream, he had been eating delicious treats, and at once he hopped off to fulfill those dreams.

Now you must understand that Hare was mischievous and very lazy. Hare liked best of all to let others do his work for him. That is why he hopped about in the bush searching for someone who would give him food.

He came upon an Elephant, who was seated beside a fire. An elephant was stirring something in a large pot, and that something smelled wonderful to Hare. “Mmm,” Hare said to himself, “I smell beans!”

He hopped to the Elephant’s side. “Dear friend,” Hare said slyly, “why are you sitting here all alone on this beautiful morning?”

Elephant harumphed and looked down his long trunk at Hare. “Go away,” he said. “Can’t you see I’m busy? I’m on cooking duty today. All the others are working the land.”

Hare stroked his long whiskers. “Mmm,” he said and sat down beside Elephant, crossed his legs and cupped his chin in his paws. For a long time, he just sat that way, staring and silent, as Elephant continued to stir his pot of beans.

After a while, Hare said, “Elephant,” his voice oozing with admiration, “now that I have seen you for myself I understand why everyone talks about what a magnificent fellow you are. You have beautiful hair. Do you mind if I stroke it? It’s so lovely.”

Now in those days, Elephant had hair growing from his neck and back. He was also very vain and was especially proud of his long mane of thick black hair. All the other elephants admired his hair, and so Hare’s flattery filled him with pleasure. “You are most welcome to stroke my hair,” Elephant said. “It is nice, isn’t it?”

“Oh yes, it is,” Hare said. He stood on tiptoes and gently stroked the Elephant’s hair. Elephant sighed with pleasure.

“Lovely, lovely,” Hare said. “May I braid your hair for you?”

The elephant closed his eyes. “Of course you can,” he said, and as Hare wound the strands around and around, Elephant slowly sank to the ground. Before long Elephant had fallen into a deep and blissful sleep.

When Hare saw this, he chuckled. His plan was working splendidly. He took a long braid of Elephant’s hair and wound it tightly around a nearby tree. “There,” he said, “he’s tied fast,” and Hare turned away from Elephant and began to eat the beans out of the pot. When the pot was completely empty, he hopped away and hid between some nearby boulders.

When the other animals returned from the fields, they saw an Elephant fast asleep. “What’s this!” they cried, and Elephant woke with a start. But when he tried to stand, he fell to the ground, for he was tied firmly to the tree.

The other animals howled with laughter, and Elephant blushed with shame. They laughed and laughed until they lifted the lid on the pot and discovered all their beans were gone. That, they decided, was not funny at all. And Elephant told them, with great remorse and shame, exactly what had happened.

The animals were furious. They decided at once that they must in turn trick Hare. And so the next morning they all set off, as planned, to the fields. Sure enough, in no time at all, Hare came hopping along, a grin upon his face. He saw the big pot on the fire once again, but this time no one else was in sight. “Mmmm,” he said, and walked to the pot and sat down on a big rock. Looking around to make sure no one was near, he lifted the lid and began to eat.

Suddenly Hare felt something tugging at his legs. “Caught you this time,” said a voice. Hare looked around. He saw no one and continued to eat.

“The owners of the beans are coming,” the voice said. “You’ll be quite a tasty meal for all of us.”

Hare began to tremble with fear, for he was certain he heard a voice. He looked around and looked around again. Still, he saw no one. “Don’t hurt me,” Hare said.

“Why not?” asked the voice. “You’ve stolen all our food.”

“But who are you?” Hare asked, his voice shaking with fear.

Before the voice answered, Hare, felt the ground rumbling. He turned around in time to see all the animals stampeding toward him. Before he could move, they set upon him. “Ah-ha, you see, we have you,” said the voice, and that was when Hare saw that the rock he sat upon was no rock at all. It was Tortoise, who thrust out his head from his shell. “You’re finished,” he said.

Hare shrieked. And then, thinking quickly, he fell upon the ground and went limp.

“Hooray! We’ve destroyed Hare,” the animals cried, and they began to feast on their beans. An elephant was especially happy and ate more than his share.

Hare lay completely still until the animals had finished their meal. When they had gone away and all was quiet, Hare stood and crept silently into the bush. When he was out of sight and reach, he turned and called, “You’ll never catch Hare!” He began to chuckle. For a long time, the other animals could hear the sound of faraway laughter, but they were satisfied. From that day on their beans would be safe. Hare would have to find others to fool. And, of course, he did, but that’s a story for another day.