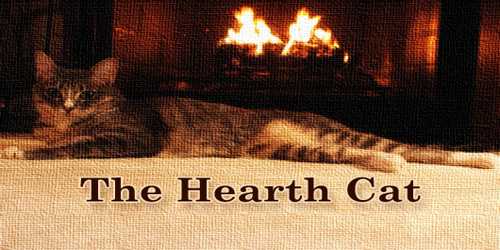 Once upon a time, a widower had three daughters. The two older girls were frivolous and foolish; they loved only to dress in fine clothing, to gossip and to paint their fingernails. But the youngest girl worried for her father’s welfare, and she cleaned the house and cooked the meals and looked after the chores. Her sisters teased her mercilessly, and they especially laughed to see her covered with ashes after she had cleaned the hearth. Before long they named her Hearth Cat, for that, they said, was what she seemed to be.

One day the girl’s father arrived home with a fish to cook for supper. He gave it to Hearth Cat, and she took the creature into the kitchen. But when she looked into his eyes, she held her knife still. He was so beautiful, with golden scales and eyes as blue as sea and sky combined. No matter how many times she raised her knife to kill the fish, she could not bring herself to do this, and at last, she ran to her father. “May I keep this fish to be my pet?” she asked. “I will prepare something else for our supper.”

Her father agreed, and she quickly took the fish to her room and placed him in the tub where he began to swim frantically around and around. As he was swimming, he called to her, “Please throw me into the well. I cannot survive in here.”

That night the girl stole out of her room, and she carried the fish to the well. There she gently dropped him in, and then, beneath the light of the bright moon, she leaned over the edge and watched him swim. He seemed so happy her heart swelled with joy.

The next day her sisters were still angry at her, for they had longed to eat a supper of fresh fish. “A pet? What kind of pet is a fish?” they teased her, but she just turned away, and that night again she walked outside to see her fish inside the well. This time as she leaned over the edge, she heard his voice again. “Come into the well with me,” the fish called. “Come here and swim with me.”

At first Hearth Cat was terrified, and she thought she must be dreaming, but the fish continued with his pleas until at last she climbed atop the well and jumped in. Down, down, down she fell. She could hear the wind rushing in her ears, and she felt frightened. But when she landed in the water, the fish swam round her and begged her to come follow him. “Swim deep,” he said, “and you will breathe.”

Holding her breath, she dived, and down they swam, still deeper, deeper than the girl had ever imagined the well could be, and soon they came to a beautiful palace carved of precious stones. “In here you will find a beautiful dress and a pair of gold slippers,” the fish said. “Put them on, and I will take you to the top of the well. Then you must hurry to the palace, for there is a ball and your sisters have gone. You must go too.

But do take care to leave the moment the last of the musicians plays a note. And return to the well at once. Dive in and remove your clothes, and when you return to your home, you will find more happiness than you might ever have imagined.”

Hearth Cat dressed in the beautiful gown and the gold slippers, and then she swam to the top of the well and climbed out. She was amazed to find she was not wet at all, and her gown shimmered in the moonlight. She knew she looked beautiful, and so she hurried to the palace ball.

There everyone gasped when she entered. “Who can that be?” she heard them whispering. No one recognized her as Hearth Cat. She danced all night, and the king asked her to dance with hearth Cat heard her sisters whispering, too. “Who can that lovely maiden be?” they asked each other. “Oh how I wish I were her.”

And just as the last note of music sounded, Hearth Cat was careful to run from the palace, but as she was clambering down the stairs, one of her slippers fell from her foot. Knowing she had no time to turn back, she left her slipper behind and raced to the well. She dived in and changed into her workday clothes, and the fish said to her, “You are a marvelous girl. Will you come to the well tomorrow? I have one more thing I must tell you.”

Hearth Cat promised she would return, and then she slipped quietly into her bed. But she had barely slid beneath her blankets when her sisters raced into the room. “Oh, you missed the most magnificent lady,” they gasped. “An extraordinary ball. We danced all night, and now the king is searching for the beautiful stranger who left a golden slipper behind. Hem in love with your son, the prince. He was spellbound many years ago, but the spell has been broken.”

The king was overjoyed to hear this news, and he called for his son to appear at the palace at once. That very day he ordered that his son and the wonderful Hearth Cat marry, and Hearth Cat’s sisters watched with horror as their sister became princess of all the land.