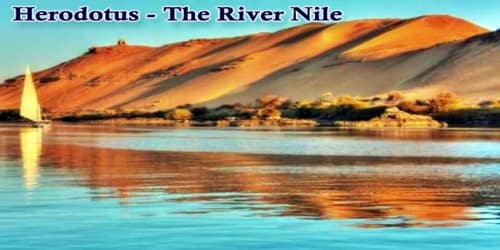 Herodotus visited Egypt when it was ruled by the Persians, and in the second book of his histories, he describes what he found there. He famously called Egypt “the gift of the Nile”.

People have been wondering since ancient Egyptian times where Africa’s greatest river begins. In fact, there are two Niles, the White Nile, and the Blue Nile, which join at Khartoum in Sudan and become one great river that flows on to Egypt and the Mediterranean sea.

But where is the source of the Nile?

A learned Egyptian, The Scribe of the Sacred Treasury of Athena, otherwise known as Egyptian goddess Neith, told Herodotus this following theory about the source of the Nile. There was a border town in the south of ancient Egypt called The Elephant, or Elephantine. It was an island in the river Nile shaped like an elephant’s tusk and is now part of the Egyptian city of Aswan. The rapids were very fierce around the island, and it was impossible to travel by boat along this part of the river.

The local god was Khnum, whose head was the shape of a ram, which is a male sheep, and who supposedly watched over the source of the Nile. He was often shown holding a jar from which flowed a stream of water.

According to the learned scribe, the waters of the Nile flowed up from a bottomless pit hidden below the swirling whirlpools at Elephantine.

The Egyptian king Psammetichos allegedly proved that the pit went down forever. He ordered his servants to make a long, long rope, and to lower it down into the pit. They could find no bottom to it.

The Scribe told Herodotus that half the water from the pit flowed over Egypt and to the north, and the other half to the South and Ethiopia. This was, of course, absurd, the Nile only flows in one direction from South to North, but it is true that Elephantine was the place where the Nile entered Egypt.

Herodotus has another story that suggested that the Nile flowed from Ethiopia. He recorded that an army of Egyptian soldiers deserted their commanders and marched to Ethiopia. There they helped the King of the Ethiopians defeat some of his own soldiers, who were rebelling against him. As a reward, the King allowed the Egyptians to settle around a lake that is the source of the Nile. Herodotus says it took four months to travel along the Nile, from Egypt, by water and land, to this place. And it is actually true that the source of the Blue Nile starts in Lake Tana in Ethiopia.

But the ancient Egyptians did not know that the longer prong of the river, the White Nile, starts even further south, with a big source rising in Lake Victoria in Uganda, and smaller streams flowing in from Rwanda and Burundi. As late as Victorian times, English explorers like Burton, Speak and Livingstone tramped their way through the deep forests of the east and central Africa in a race to discover the true source of the Nile.

Although the start of the Nile was very mysterious to the Egyptians, they, of course, knew all about how it flowed into the Mediterranean Sea. A large part of ancient Egypt was in the Delta region of the Nile. This is where the river looks a little like the flat palm of your hand, with fingers pointing out into the sea. In between the water channels, the land was very fertile and was one of the best places on earth for growing crops.

By the way, the American city of Memphis, Tennessee on the banks of River Mississippi, is named after the ancient Egyptian capital – Memphis on the River Nile. Both cities are at the head of the fertile Delta regions of great rivers, so the name-sharing between an American city, and an ancient Egyptian one is no coincidence.

For most of history, the Nile has flooded its banks in Egypt between the months of June and September. The annual flooding only stopped when President Nassar of Egypt built the giant concrete Aswan dam in the 1960s – not far from ancient Elephantine.

The annual flooding of the Nile watered all the lands on either side and made it very easy to grow crops. Herodotus says that unlike almost anywhere else in the world, the Egyptians had no need to break up the fields with plows. All they had to do was wait until the Nile had finished flooding, and then scatter seed on the ground. Afterward, they would let pigs loose to trample the seed into the earth.

Naturally, Herodotus wondered why the Nile flooded. He considered various theories put forward by fellow Greeks who wanted to gain a reputation for being clever. According to one theory, which he thought was idiotic, every summer, when the snows melt in the mountains of Ethiopia, water flows into the Nile and travels down to the sea through Egypt. Herodotus could not believe that there could be snow in a place as hot as Africa, even though this is what actually happens and is the correct answer to the question, why the Nile flooded. The idea he favored was more fanciful. He believed that in winter, the blustery north wind blew the sun through the sky to Egypt. When it was there, it sucked up the waters that flooded over the Egyptian fields. That’s why the waters of the Nile were low in winter. He’s clearly describing how water evaporates in the sun.

But in summer, so he said, the sun returned to its normal position in the sky, and the Nile filled up again with water and overflowed its banks. By the way, just in case anyone is wondering, it’s definitely not true that the sun is blown across the sky by the wind. Herodotus got that wrong, but it is interesting to see how he thought over various theories.

Even today, about 95% of Egypt’s population lives within twelve miles of the river. Were it not for the river and the rich black earth which is swept up, the amazing civilization of ancient Egypt would have never existed. And so Herodotus was right to say that Egypt is the gift of the River Nile.