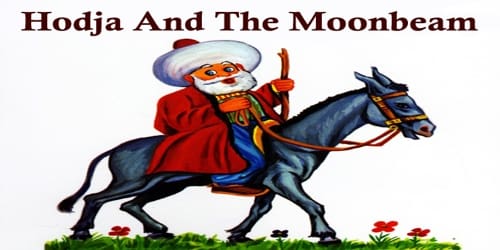 Hodja And The Moonbeam

Many people in the village believed that Nasreddin Hodja was a wise man. They admired his wit as they listened to his words. But some folks only laughed at Hodja, and sometimes, behind his back, they whispered, “What a fool he is.”

Some people do not understand that those who may appear foolish often are wiser than we wish to believe.

Now Hodja knew about the people’s taunts, and he knew that some people laughed at him. He did not seem to mind. Hodja was nearly always cheerful.

One day there was trouble in the village, and no one could talk about anything else. Over a period of several days, a thief had broken into homes and stolen this and that. All the people in the village were worried. “He stole my finest tapestry,” one woman complained. “He robbed us of our candlesticks,” another said.

“We must catch the thief!” everyone agreed. “But how?” They fretted and frowned, but nobody knew what to do.

“I’m worried, too,” Hodja’s wife said to him while they were walking through the market. “Hodja, you know our home is not very secure. And listen to the neighbor’s talk. What will we do if the thief breaks into our home? How can we make sure we are not robbed?”

“Never mind?” his wife exclaimed. “How can you say such a thing? How can I not mind when there is a thief about? How can I ignore the danger?”

“Have some sympathy for the thief,” Hodja said.

“Have you lost your mind?” his wife said. “Why would I feel sympathy for a thief?”

“I was a thief once,” Hodja whispered, and now the twinkle in his eye was brighter still.

“You? You were a thief?” his wife asked incredulously.

“Why yes, of course. That is how I came to own all the treasures that I do. Now, wife, I will tell you exactly how I managed if you promise not to tell anyone. I don’t want you rushing to the market to whisper about my secrets. Promise you won’t tell.”

And so Hodja told his wife how he had worked as a thief.

Naturally, the moment Hodja’s wife was alone, she could think of nothing else but his secret, and she could not bear to keep it to herself. That very afternoon she ran to visit her friend, Oz. “You mustn’t tell anyone,” she whispered to her friend, “but Hodja was a thief once. He told me so himself. And that is how he came to own so many treasures. If I tell you how he managed, do you promise not to tell a soul?”

Oz laughed. “What treasures does Hodja own?” she asked. She had visited their home many times but she knew of no fine things.

“Oh, his treasures are hidden,” Hodja’s wife said. “He told me so himself, and if you only knew his remarkable scheme.”

“What magic words?” Oz asked, excited at this notion, thinking she might tell her husband, and perhaps she would tell her sister. But she would make them promise to tell no one else. “Tell me the magic words.”

“And then a moonbeam came and carried him into the homes of the people he robbed,” Hodja’s wife said breathlessly.

But later she told her husband the tale and made him promise to tell no one. Naturally, he told a friend, who told another friend. By nightfall, everyone in the village knew Hodja’s magic words and everyone had promised to tell no one.

The next night Oz and her husband were fast asleep when they suddenly heard a loud crash in their courtyard.

They raced downstairs and found in the courtyard a young man, bruised and battered from his fall. Beside him lay a bag. In that bag were candlesticks and carpets, cups and candles, shirts, shawls, sashes fine things stolen from a dozen homes.

When the thief came before the magistrate the next day, he pleaded innocence. “Your honor, I was only trying to ride a moonbeam,” he said.

The magistrate frowned. “The evidence is overwhelming,” he said. “You are guilty of theft.”

There was a mischievous twinkle in Hodja’s eye as he stood in the courtroom with the other villagers, a twinkle that everyone who knew the tale saw. They all understood that Hodja had managed to trick a thief, and to trick his fellow villagers, too.