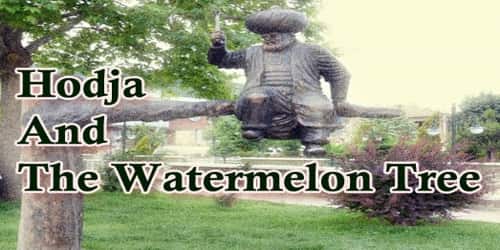 Hodja And The Watermelon Tree

One bright warm day, Nasreddin Hodja sat upon the riverbank enjoying the sunshine. He had sneaked away from the hustle and bustle of the city so that he could daydream in peace. He had great faith in his daydreams, for he knew that he always learned something important on these days.

And so he leaned against a tree and looked up and noticed the walnuts growing there. He climbed up to pick a few, and these he put into his pocket for later. Then he took off his turban, unfastened his robes, and set about his daydreaming.

“Now what wise thing shall I think today?” Hodja wondered aloud, and while he wondered, he idly palmed the walnuts in his pocket.

“Walnuts are lovely food,” he said, “but they are very small. Amazing, isn’t it, that walnuts grow upon such a tall, strong tree.”

He looked up, and up. “Yes, it is a tall tree, a mighty tree. I wonder why this tree doesn’t grow something much bigger and stronger. If I were creating the world no offense, Allah – I believe I would give this tree something more important to do.”

Now Hodja did not like to offend Allah, but he did wonder sometimes at the ways of the world, and this day he began to ponder the reasons such a tall, strong tree would grow so big only to bear something as tiny as a walnut.

Hodja decided to take a walk, and so he strolled along, and on his way, he passed many homes and lush gardens. He smiled at the sight of the marigolds and morning glories, and after a while, he came to one of the most beautiful gardens of all. In this garden, there were flowers, yes, and there were ripe vegetables. “Ah, what a beautiful sight,” Hodja said, and he sighed. Suddenly, his gaze fell upon the watermelon vines.

Hodja bent down and touched the watermelons, which were not yet fully grown and not quite ripe. Still, they were large and round and impressive. “Nice fruit,” Hodja said, and then he smiled, for he had just had one of the wisest ideas of his whole life, an idea he was amazed no one had ever thought of before now.

“Praise Allah, for your world is great,” Hodja said, “and in your world, there are all these wondrous things. Walnuts and trees, flowers and vines, and nice, big, juicy watermelons.”

Hodja’s mouth watered, for he did love watermelons. But now Hodja blushed, for he had something else to say to Allah, and he did not wish to offend. Still, Hodja considered himself to be a very wise man.

“There is just one idea, and I know this is wise indeed,” Hodja said. “The tree is tall and sturdy, and on its branches grows tiny walnuts. And here is a vine, a puny little plant that grows along the ground, but on its branches grows these wonderful, big fruits. Surely Allah wasn’t thinking when he made the walnut grow upon the sturdy tree and left the watermelon on the ground.”

At that Hodja yawned, for this was truly a great idea, and he thought he must take another nap and think it over some more. When he returned to the village, he would discuss his idea with the other wise men, but first, he simply must have a bit of sleep.

And so Hodja returned to the spot where he had been. Once again he took off his turban and opened the collar of his robe, and he leaned against the mighty tree trunk and closed his eyes. In one moment he was fast asleep in the shade of the walnut tree.

A light wind rose, and with it, the tree branches swayed, and when they did, the walnuts began to fall to the ground. One of these falling walnuts fell right on Hodja’s head. He woke with a start and felt the spot on his head. “What’s that?” he asked, rubbing his eyes. Another walnut fell on his head. “Ah,” Hodja said, and he looked up and winked.

“So this is why walnuts grow on trees and watermelons grow on the ground,” he said. “Allah is great indeed. And now I understand.”