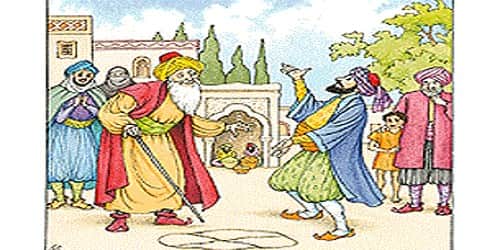 Hodja and the Baklava

Hodja and the Baklava (A Turkish Tale)

One day long ago, a foreign scholar traveled through Anatolia, and in each village and town he visited, he asked to meet the wisest man. When he arrived in Ashkehir, he stopped in the marketplace and asked the merchants where he might find the wisest man in town.

“Ahh, very simple,” said one merchant, for everyone in Ashkehir considered Nasreddin Hodja to be their wisest man. The merchant summoned Hodja to the town square, and there he and the scholar met. The townsfolk gathered round to listen to what these two wise men might say.

The scholar bowed to Hodja, but he did not say a word. Instead, with his cane, he drew a circle in the sand at his feet. He smiled and passed his cane to Hodja.

Hodja, too, was silent. He bowed and smiled, and then, using the cane, he drew a line down the middle of the circle, dividing it in two. He silently returned the cane to the scholar.

The townsfolk scratched their heads, for they could not understand this silent language of the two wise men.

The scholar smiled broadly, and with his cane, he drew another line in the circle. Now the circle was divided into four equal parts, and again the scholar passed his cane to Hodja.

Hodja waved away the cane. He bent his knees and reached wide and lifted as if he were lifting three parts of the circle into his arms. Extending his arm, he gestured towards the fourth part and bowed to the scholar.

“Ah yes,” the scholar sighed happily, and with his right hand he pointed to the ground and wriggled his fingers. The townsfolk stared at the ground, then looked up at Hodja.

Hodja lifted his own right hand and stretched his fingers to the sky, pointing to the great, billowing clouds.

The people’s mouths fell open, so amazed were they by this silent communication. Obviously these two wise men had more wisdom and worldliness than they. The townsfolk began to applaud, and both Hodja and the scholar bowed. Then Hodja waved farewell and returned to his home.

When he was gone, the scholar turned to the people. “Surely you have one of the wisest men in all the world here in your village.”

“But what have you shown us, kind sir?” one of the merchants asked. “We are not so wise as Hodja, and we need you to explain the meaning of this silent conversation.”

The scholar nodded. “Certainly, and I will happily tell you. You see, when I drew my picture to show your Hodja that the world was round, he drew a line to show me, as is the case, that the equator divides the world in two.”

“And then, when I divided the Earth into four sections, your Hodja wisely demonstrated that three-quarters of the Earth is made of water and only one is composed of land.”

“Of course,” the people cried.

“And when I asked him what caused the rain to fall, he raised his hand to the sky,” the scholar said. “Yes, yes! Water evaporates and rises like mist into the sky, and up above clouds form and these turn into rain.”

The townspeople cheered loudly, and the scholar went on his way, thanking them for introducing him to such a wise man as Hodja.

The next day Hodja walked through the market, and when he came to the merchant who had introduced him to the scholar, he shook his head. “How could you introduce me to such a man?” Hodja asked. He seemed terribly upset.

The merchant was puzzled. “I’m sorry, Hodja. What was the trouble? I only meant for you to share your wisdom with another wise man. And so you did.”

“He was terribly greedy,” Hodja said. “One of the greediest men I’ve ever met, and not so very wise in the ways of the world.”

“How do you know that wise Hodja?” the merchant asked.

Hodja laughed. “You saw for yourself. When he drew a picture of a pan of baklava upon the sand at our feet, I cut it in half, for he could not possibly eat a whole pan of baklava all alone, and so I thought we should divide it in two. And what did he reply? He simply cut it in four pieces, and so, naturally, I told him I would eat three-fourths of it.”

“And then!” Hodja cried, “he showed what a true fool he is. With his fingers, he said we should sprinkle nuts on top. Ridiculous!”

“And so, of course, I threw up my hand to tell him you cannot sprinkle nuts upon hot baklava!”

“Of course you can’t,” the merchant said, scratching his head. Nobody but Hodja would have seen a pan of baklava in a circle in the sand. Hodja never ceased to amaze the townspeople.