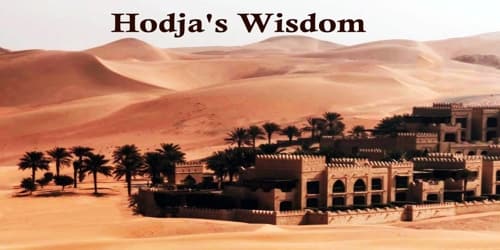 Everyone hopes to be wise, and some say that Hodja was a wise man, but others say he was a fool. No one agrees, but everyone tells stories about him, and when they tell the stories, they scratch their heads and wonder, “Was he a wise man or a fool?” When they cannot agree one way or the other, they tell the tale of the day Hodja’s donkey was stolen.

It was a fine spring day when Hodja walked to the barn to fetch his donkey, but the creature was gone, and Hodja was furious. His neighbors gathered at the barn. One of them asked, “Was the barn door locked?”

Hodja shrugged and said, “I heard nothing that seemed more than a dream.”

The neighbors began to scold Hodja. “You should have tied your donkey securely,” one said. “You shouldn’t ignore noises in the night,” another added. “Only a fool leaves his barn door open to thieves,” another exclaimed. They all began to laugh at Hodja’s foolishness until at last Hodja said, “Do you blame me?”

“We blame you for ignoring the noise, leaving the door open and not tying up your donkey,” they said. Hodja placed his hands upon his hips and said, “So you put the blame on me, and you think the thief is innocent. You are fools!”

And when people tell that story, everyone nods and smiles, and some say, “The fool,” and others say, “What a wise man,” and then they tell the tale of the day Hodja was passing through a cemetery. When he spied an empty grave, freshly dug, he decided he would climb inside. “Perhaps the angels will come and talk to me if I lie still and look dead,” he said. He climbed into the grave and closed his eyes and lay very still, awaiting the angels.

After a while, he heard loud clanging and banging, and as the sounds grew closer, Hodja sat straight up and cried, “The end of the world is coming!” He scrambled out of the grave.

That was when he saw a herd of donkeys coming toward him, carrying pots and pans on their backs. “Aha, it’s you who are making the noise,” Hodja cried, leaping right in front of them.

Frightened by the sudden appearance of a man blocking their path, the donkeys began to scatter, running this way and that, with the pots and pans and crockery they carried clanging and banging still louder. Bucking and kicking, the donkeys ran into one another, and soon everything they carried had fallen to the ground.

Now the donkeys’ owner appeared, and when he saw the destruction, he shouted, “How dare you frighten my donkeys! Who are you and what were you doing in this graveyard?”

Hodja bowed and said, “I came here from another world.” He pointed at the grave. “I wanted to see what was happening.”

“I’ll show you what’s happening,” the man said, and he began to hit and kick Hodja until Hodja fell gasping to the ground.

Not long afterward, Hodja was able to breathe again, and he got up and began to walk home. His body was sore and he was covered with bruises; his clothes were filthy and torn.

When the villagers saw him, they ran to his aid. “Hodja, Hodja, are you all right? What’s happened to you?”

So naturally, the people asked again. “Hodja, please tell us what happened.”

Hodja stopped and looked at them, striking his best wise-man pose, and said very solemnly, “I was dead, and I am coming just now from the other world.”

The people were amazed. “Oh my,” they said, “so how are things over there in that other world?”

“Just fine,” Hodja said calmly. “Things are just fine as long as you do not scare the donkeys who carry pots and pans.”

Still, people do not know if Hodja was wise or foolish, and many tell the tale of the day Hodja gave his donkey to a merchant and asked him to sell it. The merchant returned the next day and said, “I couldn’t sell your donkey, Hodja, so I took it to Konya and made it a judge.”

Hodja was furious. Right away he packed his bags and traveled to Konya to tell the judge of Konya his story. When the judge heard the tale, he ordered the merchant to appear before him. He reprimanded him and said, “Find Hodja’s donkey and bring it to him within this hour, or only God knows what your punishment will be.”

The merchant was terrified, for the judge of Konya was known to be a harsh man, and so he dashed to the market and bought another donkey, and this he gave to Hodja upon his return within the hour.

The judge, watching this, said, “Excuse me, but why do you keep looking at the donkey and back at me? Don’t you like this donkey? He seems very fine.”

“Oh pardon me,” Hodja said and bowed to the judge. “I like the donkey very well. I do, I do. But you were so very different before.”

And people hear this tale, and they say Hodja was wise, and others say he was a fool. They never reach a final conclusion, and so they go on telling stories of the famous Hodja.