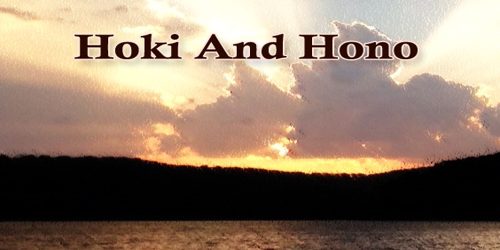 Once upon a time, long long ago, two brothers lived together in Japan. The brothers were as different from each other as night from day.

Hoki was generous and good, and spent his days in the cool mountains, hunting for pheasants to feed the family. Hono was greedy and cruel. He spent his days by the sea, fishing for food to feed only himself.

One day Hoki walked out of the mountains and, looking out to sea, he decided he would try his hand at fishing. He borrowed his brother’s hook and sat at the edge of the sea. There he fished for many hours but had no luck.

At last, the sun began to set and Hoki stood to leave. Suddenly Hoki felt something grab his line. He pulled and pulled, struggling to hold onto the line, but, alas, the line snapped and the fish swam away with the hook in his mouth.

When Hoki returned home, he told his brother what had happened. Hono was furious. “You must find my fishing hook,” he cried at his brother, “and you may not come back home until you have. That was a special hook.” Hono hoped his brother would disappear forever.

Sad and discouraged, Hoki walked to the edge of the sea and sat down to think. “How will I ever find a lost fishhook?” he asked himself. He decided to jump into the sea to search for the hook. “I do not know how to swim,” he said to himself, “but I must try to find that hook.”

He jumped into the water. Down, down, down he went. “Surely I will drown,” he gurgled as he struggled against the currents. But Hoki did not drown, for the Lord of the Tides was watching over him, as he watched over all good men.

Hoki realized that he could breathe. Calming down, he let himself sink deeper and deeper, enjoying the cool embrace of the water. At last, he reached the bottom of the sea and he gasped, for before him he saw an exquisite palace built of shimmering pearls and glistening shells. Sitting outside of the palace he saw, to his delight, a beautiful maiden combing her long black hair with a comb made of coral. When she looked up and saw Hoki floating toward her, she blushed and turned to go inside the palace, for she was a modest maiden and she wanted to announce the arrival of this stranger to her father, the King of the Sea.

Hoki landed on the soft sand, and a moment later the maiden and the good King of the Sea greeted him. “Welcome to our watery world,” said the king. Hoki was so enchanted with the beauty of the palace and the kindness of the sea creatures that he soon forgot all about his brother’s fishing hook.

The members of the court were gracious and welcoming. Hoki spent many days wandering through the reedy gardens, staring in wonder at the many creatures he had never so much as imagined. Soon he fell in love with the maiden of the coral comb, who was called the Jewel Lady. She too fell in love, for she sensed that Hoki was a good and kind man, and not long afterward Hoki and the Jewel Lady married.

Many months passed in happiness, but then one day Hoki woke with a start, for he had remembered his brother’s fishing hook. “My dearest wife,” he said, “I have forgotten a promise I made. I must find my brother’s fishing hook and return it to him, for I told him that I would. A man must always keep his promises.”

His wife agreed. “You will need help,” she said, and she went to her father to seek his advice. Soon the King of the Sea had gathered all the sea creatures together.

“We seek a fishhook lost many months ago,” he said to one and all. The sea creature looked at one another. “Have you seen a fishhook?” they bubbled and gurgled and murmured as the king walked through the crowds. At last, he came upon a sad-looking shark who sat without moving. “What’s this?” asked the king, and he looked into the sad shark’s eyes. Slowly the shark opened his mouth, and the king saw a terrible sore. He reached inside and gently pulled. “Here is your hook,” he said to Hoki.

Hoki smiled, but then, with a sad heart, he turned to his wife. “I must return to my old home to give my brother back his hook,” he said. “I hope you will come live with me there.”

The Jewel Lady embraced her husband. “I will come in a year and a day, but if I am to live on land, you must make a palace for me as wonderful as ours below the sea. The roof must be constructed of cormorants’ wings. The floors must be of polished sand. Our rooms must shimmer as our walls below the sea shimmer. My husband, I am going to give birth to your son, and I wish him to live a life as gentle and sweet as our life here. Remember, one year and one day.”

Hoki promised he would do his best, and with that, he bade his wife farewell. The King of the Sea turned to his son-in-law and said: “Here is a magical shell. If you need help, you must ask the shell to bring the sea to the land, and the shell will obey you. And if you tell it to send the sea back to its bed, that too shall happen.”

Hoki climbed upon the back of a dolphin and rode up and up and up. At last, he came to the shore where he had lost his hook so many months before. There he saw his brother Hono sitting on the beach staring out at the horizon. “Here is your hook!” Hoki cried to his brother, but Hono was furious, for he had hoped that Hoki would never return.

He rushed at Hoki, drawing out a huge silver dagger. Hoki was astonished at this, but remembering his magical shell, he looked down and whispered, “Bring up the sea.” At once an enormous wave rolled up onto the beach and swept Hono into its arms.

“Return to your bed,” Hoki called, and with that the wave rolled backward, taking Hono away forever.

Hoki set to work at once building a palace. He worked night and day. At last, as he was placing cormorant wings on the roof, he turned and saw his beloved, riding toward him on the back of a sea serpent. One year and one day had passed.

“The palace is not completed!” she cried. “I cannot stay with you, a good husband. I will bear our child here, but then I must return to the sea.”

And that is what happened. The Jewel Lady gave birth to a boy, and the next day the sea serpent returned to take her back to her home in the sea. She and Hoki wept and embraced one last time.

Hoki and his son lived the rest of their days in the beautiful palace. His son grew strong and handsome, and he was as good and as generous as his father.

Every evening Hoki stood at the edge of the sea, dreaming of his wife. And below the sea, every evening she stared up at the shimmering lights above and dreamed of her husband and child. In their memories, there was much joy.