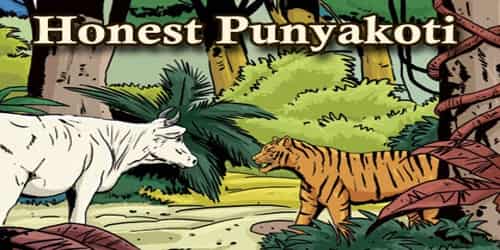 Once upon a time, there was a village in Karnataka, which was situated at the foot of a hill. In this village lived a herd of cows, whose leader was a beautiful cow named Punyakoti. She had a single calf, whom she loved with all her heart.

Every morning, all cows would go to graze in an in a grassy meadow halfway up the hill, leaving their calves behind in the village. They would return to the village in the evening.

Near the pasture was a jungle, which was the abode of a tiger, named Hulia. In his youth, Hulia had been the terror of the whole jungle: unfortunately, now he was old and weak. Having lost his old agility, he found it very difficult to catch his prey in the jungle. He had not eaten for several days and was weak from hunger. At length, driven to despair, he came out of the jungle, hoping to find some food elsewhere.

It so happened that at that very moment the herd was returning home from the pasture. As he spotted them from afar, Hulia was thrilled. He lay in wait for them behind a big rock, confident of getting a good meal.

They had hardly come close enough, when, desperate with hunger, Hulia pounced! However, he had overestimated his ability and fell short of his target. The herd scattered in panic and ran away. Hulia gave chase with all the speed he could muster. Alas, it was pitifully inadequate!

He was so weak and exhausted that he could hardly run. He was unable to catch even a single cow, and the herd made good its escape.

Hulia climbed back on the rock in disgust, cursing his own rashness that had brought about this situation. As he sat there in utter exhaustion, panting under the strain of his efforts, he suddenly saw a very welcome sight.

There, in the distance, was a lone cow walking along the path towards him!

It was Punyakoti, who had somehow got separated from the rest of the herd. She was walking briskly ahead, saying to herself, “Oh! I am late!” My child will be waiting for me. She was in such a hurry to reach home that she did not notice Hulia.

To Hulia, this seemed a heaven-sent opportunity to make up for the one he had squandered by his own foolishness earlier, and he was determined not to let go of it! Patiently he waited, promising himself, “I shall not let this one go! I’ll have a good feast today.”

Hulia waited until Punyakoti had come very close. Then he emerged from his hiding place and gleefully declared, licking his lips, “At last, my patience has been rewarded! I shall have a delicious meal after so many days!”

Punyakoti was a wise and brave cow. She realized that she was no match for Hulia, even though he was old and weak. So there was no point resisting. However, the picture of her hungry calf waiting eagerly for her, flashed before her eyes.

She said to Hulia, “I am ready to be your food. But can you please do me a favor? At home, my child is waiting for me. Will you let me go and feed him? I promise you that I shall come back to you immediately after that.”

The tiger burst into loud, sarcastic laughter. “Do you take me to be such a fool?” He asked. “Don’t I know that if let you go, you’ll run away, never to come back?”

Punyakoti said earnestly, “Believe me I will. I give you my word with Mother Earth as my witness.”

Hulia sighed and said, “All right you may go. But return soon!” Punyakoti gratefully said, “Trust me, I will! Thank you so much, Hulia!”

She ran all the way home and met her calf, who was waiting eagerly for her. She fed him lovingly. After he had drunk his fill, she hugged him and said, “My son, I have to bid you goodbye now. In fact, I have come to you on borrowed time. Hulia the tiger caught me, and I promised him that I would return to him after feeding you.”

The calf was aghast. He said, “But mother, you don’t have to return!”

But Punyakoti disdained the suggestion. She said, “Maybe I can run away from Hulia, but I can’t run away from myself! If I did as you say, I would never be able to forgive myself. I gave Hulia a solemn promise that I would return, and he let me go because he trusted me to keep my word. How can I betray that trust? Truth is everything to me.”

At this, her calf tearfully asked, “Mother, who will feed me when I am hungry? Who will look after me?”

Punyakoti turned to the other cows and said, “My sisters, please treat my calf like your own child. Be kind to him for he has no one else but you.” She turned to go.

Deeply moved, all the cows said, “Punyakoti, we will also come with you to the tiger.”

But Punyakoti said, “Please don’t. You must take care of my child.”

“Don’t go, mother!” Implored her calf. But Punyakoti steeled her heart and ran towards the hill.

Meanwhile, Hulia was thinking, “What a fool I was, to let my prey escape! I was too tired to think straight that’s why I did something so crazy! Who in his senses would come back voluntarily to face death, when he has a chance to escape?”

He was still running his own stupidity, when he saw her, he was astounded. Hunger and weakness notwithstanding, Hulia could not help lauding the nobility of the cow who had kept her word and come back to die.

“You are great!” He exclaimed. “I cannot eat such a truthful and noble animal like you. You are my own sister. Go, Punyakoti goes back to your child!” And he turned and walked away without a backward glance.

Thanking the tiger for his noble gesture which had been inspired by her own Punyakoti sped down the hill, and was happily reunited with her calf.

Moral of the story: ‘Honesty is always rewarded.’