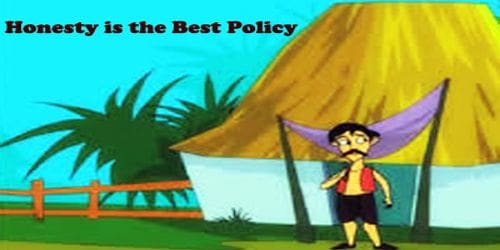 Once there lived a poor farmer who worked very hard to maintain his big family. But he could hardly manage two square meals a day. One day while working in the field he found a basket. He picked it up and carried it home. His wife became very pleased to see it. She thought the basket must contain some valuable things. By selling those things they could overcome their poverty and enjoy happy days. But the farmer was an honest man. He was not at all interested to use anything inside the basket. His wife opened it and found fifty thousand taka in a paper packet covered with some ragged clothes. She told the farmer to use all the money for themselves. The farmer was in a great problem.

However, the farmer announced in the market that a basket was found by him. The real owner could take it from him proving his/her real identity. At last the owner was found. He gave the farmer ten thousand taka being very pleased with him. With the money, the farmer started a small business. In the course of time, he became a rich man. His poverty disappeared and he became a happy man. Thus his honesty was rewarded.