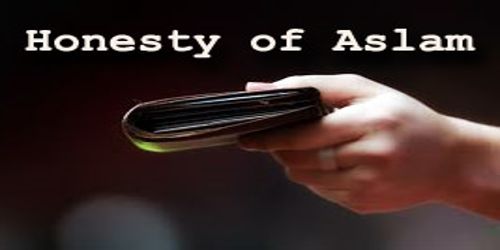 Aslam is a second-year college student. He studies at a government college. He walks to college every day. One day while he was going to college, he found a wallet lying on the footpath. First, he stopped and looked around. But he saw nobody. He was in a fix what to do. He could not decide what he should do. After thinking for some time, he planned to take the wallet for he would try to find its owner. Though he hesitated, he picked it and he opened it to see if there was any address in it. He looked for an address but he did not find any address or phone number. Then he noticed that the wallet had ten thousand taka and some important documents. He kept the wallet in his college bag and went to college. He attended the classes but he was worried. During the recess, he wrote a notice and hung it beside the notice board of the college. He also mentioned his name and mobile number there to contact him. Of course, he became sure that it might be dropped by someone. He thought that he must return to its owner. But how he would find the owner was a question.

After going home, he disclosed the matter to his parents. They wanted to help their son. They also praised his sense of responsibility. Then Aslam along with his parents went to the nearby police station. Aslam told the officer-in-charge everything about the wallet and submitted it to the officer. The officer assured Aslam that he would try to find its owner. The next day, the officer phoned Aslam’s parents and told them to come to the police station. So, they came and saw a man who lost his wallet. Finding all the evidence, the officer returned the wallet to the man. The man thanked Asad and expressed his gratitude.