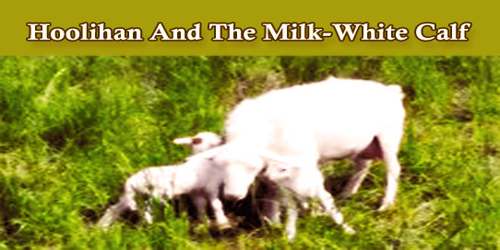 Hoolihan And The Milk-White Calf

Long ago atop a hill near Tipperary, a farmer grazed his cattle. The land was lush and green, and the cattle grazed contentedly. One night, as the farmer sat beneath the faint starlight and the cattle lazed peacefully in the thick grass, a horselike creature with flaming wings and beard and a dragon’s tail suddenly appeared in the sky.

Before the farmer saw the creature, he heard a wild flapping of wings. When he looked up, his eyes nearly popped from his head, for there was a creature such as he had never seen, hissing and shooting fire from its nostrils. Quaking with fear, the farmer could not move. He sat and stared and as he did, the creature transformed itself into a massive, hideous hyena with enormous claws and horns.

“What do you want?” the farmer wailed, but before the words had left his mouth, the creature once again transformed, this time into a gigantic ape with webbed feet and a wide peacock’s tail. The creature roared and bellowed and screamed and howled. The farmer, terrified beyond imagining, covered his head with his blanket.

This did him no good, of course, for the creature was the Queen of the Fairies. The fairies, you see, lived upon this hill, and they had grown weary of the farmer and his lowing cattle. They begged their queen to scare him away.

The Fairy Queen took one deep breath and blew, and off the blanket flew.

The poor farmer began to quake, but he could not move or close his eyes. Paralyzed with fear, he stared as the cattle began to run wildly about the hill, kicking up their legs. They ran this way and that and did not stop until the sun rose and the creature vanished with the light.

The next day the farmer, too afraid to return to the hill, hired a man to be his herdsman. The herdsman knew nothing of the fairies, and so he climbed the hill, happy for this pleasant job. But that night, as the herdsman sat upon the hill, a huge lion appeared, with an elephant’s trunk and huge talons. The herdsman screamed, and the cattle, once more terrified, began to run again. In their fright, some raced downhill and tumbled into the river, and some lay as if dead upon the ground, afraid to move.

The herdsman quit that night.

The next night another man took his place, but once again the Fairy Queen, in hideous disguise, scared the man out of his wits. The farmer, desperate to use his land, hired one man after another, but each one quit after one night on the hill, and soon the word spread. The farmer could find no one to look after his dwindling herd. He gave up and left that hill to the fairies.

Happy to have their home again, the fairies spent their nights singing and dancing, sipping dew from acorn cups, spreading out their feasts on the mushroom caps, climbing the lily stalks, and donning bluebells on their tiny heads.

Now in that country there lived a brave fellow named Hoolihan who claimed to be afraid of nothing. “I play the pipes,” Hoolihan said, “better than any man alive. And nothing in the world scares me.”

Now the farmer heard the braggart’s words and said, “I’ll pay you well to look after my herd if you’ll take them to the hill over yonder. But be warned. The fairies live there.”

“Well,” said Hoolihan, “I’m certainly afraid of no fairies,” and so he set off to the hilltop that very night.

As the moon rose, Hoolihan began to play his pipes, and as he did, he could feel the fairies brushing past him. A moment later an enormous black cat standing on the tips of its razor-sharp claws came to him. The cat mewed in a voice so shrill and loud, it sounded like a thousand cats mewing at once. Then the cat swelled to 10 times its size and whirled around. But Hoolihan grinned and said, “So you’d like to dance, would you? I’ll play my pipes for you.” And so he did.

She moved to Hoolihan’s side and brushed up against him. She was trying to fool him, of course, but Hoolihan was no fool. He dropped his pipes and leaped upon her back.

Shaking with rage, she raced from the hilltop straight to the River Shannon, and beneath the shining moonlight, she bounded across the river in one gigantic leap. On the far bank, she kicked up her heels and flung poor Hoolihan onto the ground.

Hoolihan landed with a thud, but he just looked up and said gaily, “Not a bad leap for a calf. But can you dance?”

The amazed Fairy Queen turned into her fairy self. “You are a bold young man,” she said. “Will you have the nerve to return the way you came?”

“Happy to,” Hoolihan answered, and so the Fairy Queen turned back into a milk-white calf and Hoolihan leaped upon her back. In one more bound, they were over the river and on the hilltop once again. The cattle stared in amazement at the brave Hoolihan.

“You have shown courage and good spirit, Hoolihan,” the Fairy Queen said, “so much so that I will promise you that while you keep a herd upon this hill, you will not be harmed. At dawn you must tell the farmer that it is you and you alone who will be permitted to graze his cattle on this land. And if I can ever help you, just ask for me.”

She vanished then in a puff of smoke.

Hoolihan passed the message to the farmer, and from that day on it was he alone who looked after the farmer’s cattle. He ate and drank at the farmer’s table, and the farmer paid him well. All his life Hoolihan was never troubled again by the fairies, and he never asked the Fairy Queen for a thing. He was happy on the hilltop with his pipes.

When he died, an old, old man, he was buried in the bright green valley known as Tipperary, but afterward, no one climbed to the top of that hill, for there was never another man as spirited and brave as Hoolihan.