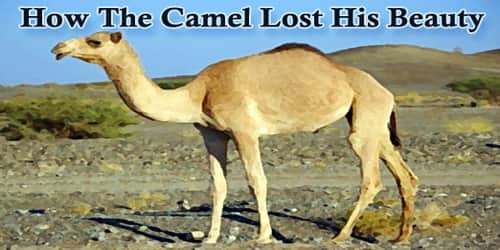 How The Camel Lost His Beauty

Once upon a time, the camel used to live, not in the desert, but in the jungle along with all the other animals. In those days, he believed it or not! The most handsome of all the animals in the jungle. He had two claims to beauty. The first was a magnificent pair of antlers, which had twelve branches and which added much glory to his forehead, and the second was a thick, bushy tail.

As you can imagine, the camel was very proud of his beautiful antlers and tail. He took great care of them, which was a good thing. But I’m sorry to say that he had a bad habit, too that of ridiculing and laughing at other animals less fortunate than himself! Chief among them were the deer, who, in those days, had a bald forehead without antlers, and the horse, who had a thin, stumpy tail. These two animals were frequently the butt of the camel’s jokes.

Seeing the deer approaching, the camel would say, “Who do we have here? Ah, it’s Mr. Badly! Aren’t you lucky you save so much time, as you don’t have to groom or sharpen your antlers?” All the other animals would burst out laughing, and the deer would blush in embarrassment.

Similarly, the horse would be greeted with “Here comes Mr. Stumpy! What happened to your tail, dear? Did a tiger eat it up? Or did someone tell you that stumpy tails are the fashion in the city?”

The horse and the deer were fed up with the camel’s teasing. One day, they happened to meet and talk, when the topic turned to the camel and his mockery. The deer burst out, “I tell you, I’m heartily sick of that vain camel! It’s not my fault that I don’t have a pair of magnificent antlers like his! Just because he has them, what right does he have to make fun of me? How I wish I could teach him a lesson he will never forget!”

The horse said, “I feel exactly the same. He thinks too highly of himself. It’s time someone brought him down a couple of pegs! Why don’t you and I be the ones to do it?”

“I’d love to!” said the deer enthusiastically. “But what can we do?”

“I have an idea,” said the horse. “Here’s how we can do it…” and he outlined his plan to the deer, who listened eagerly and agreed.

The next day, the camel was standing alone on the bank of a lake, admiring his reflection in the water, when the deer and the horse walked up to him.

“Why, if it isn’t Baldy and Stumpy together! Where are you off to?” Enquired the camel with his usual mocking laugh.

To his surprise, neither of the two blushed or looked embarrassed, as was their won’t at his usual teasing. It appeared as if they were preoccupied with some worry, for, both looked grave!

“Friend Camel,” said the deer, “You are such a handsome, majestic animal with your great height, your robust body, those majestic antlers…”

“….and that lovely, thick tail!” cut in the horse. “Truly you are the most good-looking animal in the entire forest!”

The camel swelled up with pride. His heart warmed to the two animals, who had never praised him like this before. He began to think that perhaps, they were not so bad after all it was not their fault that they were ugly! All were not destined to be perfect like himself!

The deer’s voice broke into his meditations “yes, Friend Camel, you are without a doubt the most handsome animal, not just of this forest but of the whole world! You are the pride and glory of our forest! Not all of us are so fortunate. We are ugly, imperfect…which is why we face so many problems….” His voice tapered off into a half-sob.

Jolted out of his self-absorption, the camel asked his new-found friend, “What is the matter? Why are you so sad?”

Sadly the deer said, “The horse and I have been invited to a party hosted by the animals of the next forest. But how can I go there with such an ugly bare forehead? I will be the laughing stock of the entire forest!”

“What about me?” put in the horse dismally. “I have such an ugly tail; I’m not fit to show myself before a distinguished assembly! No, there’s no help for it except to skip the party. Unless….” he paused as if struck by a sudden thought, and took a sidelong look at the camel.

“Yes? Unless what?” Asked the camel eagerly.

“Friend Camel, your tail and antlers would be the glory of any gathering- even that of the gods! They are things anyone would be proud to be seen in!” praised the deer and he went on, “If you could really make a fantastic impression on the animals of the next forest.”

“Why, yes, we could indeed!” said the deer, looking up as if such an idea had only just occurred to him. “What a great idea, Horse! It is the only way two ugly animals like us can attend that party without losing face. I’m sure our friend Camel will agree to lend us his lovely possessions, as he is a noble, large- animal. His nature is as beautiful as his body, as we all well know! So won’t you lend your magnificent antlers to me and your splendid tail to the horse for the party, Friend Camel? Please?”

The camel hesitated. Although loath to part with his prized possessions, even for a day, how could he refuse after hearing such fulsome praise?

“You will return them to me immediately after you return from the party, won’t you?” he asked.

“Of course! How could you even doubt it?” asked the horse in a hurt tone.

“The moment we are back, we will come right here to you and return your things. Just wait for us at the same spot tomorrow evening, and we’ll meet you here,” added the deer.

The camel then look of his magnificent antlers and handed them to the deer, who immediately put them on and thanked him effusively. Next, he exchanged tails with the horse, giving him his thick, glossy tail and receiving in its place the latter’s stumpy one. The horse also thanked him profusely.

“And now, we’ll take your leave, friend!” said the deer. “Thank you so much for your help. See you tomorrow evening!” The duo then vanished into the undergrowth, chuckling to themselves.

The camel’s bald forehead and stumpy tail made him feel awkward and ill at ease. That day, he stayed away from all his familiar haunts, lest the other animals tease him about his altered appearance! Only now did he realize how the deer and the horse would have felt when he taunted them. He wished they would come back soon and return his antlers and tail.

Time seemed to crawl past at a snail’s pace for the poor camel that day. However, at long last, the next evening arrived. In this eagerness to get back his things, the camel arrived at the appointed spot well before the stipulated time. However, the evening turned into night and still; there was no sign of the borrowers!

Since then many days and years passed, but the poor camel has not got back either his antler’s tail. He is deeply grieved about the loss. Hence, he rarely drinks water, for, when he comes to a pond to drink and beholds his reflection, the sight of his bare and ugly forehead, devoid of his handsome antlers, saddens him!

Thus did the camel’s pride bring him to a sorry pass!

Moral of the story: ‘Pride goes before a fall.’