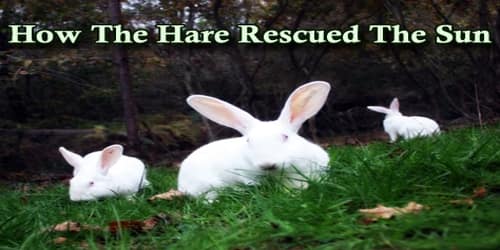 How The Hare Rescued The Sun

Long, long ago, there were numerous birds and animals living in the vast plains of Siberia, which are known as the tundra.

One day, a terrible calamity befell them. The tundra was suddenly shrouded in darkness! It was like a never-ending night; in vain did the animal wait for the sun to rise and illuminate their world once again. The hours turned to days, and the days to months. The land was enveloped in gloom and misery as all the animals and birds stumbled about in the darkness, seeking their food by touch.

Unaccustomed to living in the dark, many animals met their end in a confrontation with unseen dangers. It was evident that this state of affairs could not go on for much longer, for, the surviving animals were badly demoralized. At length, it was decided to call a ground council; envoys were dispatched to the council from every species of animal and bird. Various alternatives were discussed during the council.

At length, the old raven, who was considered the wisest of all, spoke up- “Friends, I would like to make a suggestion. If you agree, I shall fly out and try to discover the cause of this darkness and its remedy.”

“But how will you make the flight in the darkness?” protested other animals.

“It is dark here, too,” pointed out the raven, “and aren’t we moving about? Anyway, someone has to do this; we can’t spend the rest of our lives in this darkness! Shouldn’t we find a remedy?”

All the animals and birds agreed, and the brave raven set off on his mission.

After many days of patient waiting, loud wing-beats in the dark announced his arrival. The animals were delighted and questioned him as to what he had found out.

The raven triumphantly announced, “My friends, I have managed to find the cause of the darkness!”

“What is it?” asked the fox anxiously.

“The light that used to brighten our land is called the Sun. I understand that some evil spirits have stolen the Sun. It seems they live in a great cavern, close to our land! They keep it in a huge stone pot. If we can steal back the Sun from the evil spirits, our world will once again be filled with light. One of us must go and bring it back. It cannot be me, because I am old and frail, and the task calls for strength. You should send a really big and strong animal. So, who shall it be?”

“The polar bear!” cried all the animals in one voice. “He is the biggest and the strongest of us all!”

At that moment, the oldest animal of the tundra a half-deaf owl- who had been dozing was woken up by the commotion. She asked a little bird what had happened, and was informed that the polar bear was to be sent to rescue the Sun.

“Oh, no!” cried the owl. “That won’t do at all! He may be big and strong, but he is a slow-witted, lumbering beast! No sooner will he come upon some scrap of food than he’ll forget all about his mission. And we’ll never get the Sun back!”

The animals realized that what the owl said was true; the bear couldn’t be trusted to bring back the sun.

“How about the wolf, then?” suggested the mole. “After the bear, he is the strongest and besides, he’s much faster.” There was a chorus of agreement.

“Eh, what are they saying?” the half-deaf owl asked the snow bunting.

“They’ve decided to send the wolf,” replied the bunting. “He’s the strongest and swiftest of us all, after the bear.”

“Rubbish! Strong and swift the wolf maybe, but he’ll never get the Sun back for you!” said the owl decisively. “He’s far too greedy to be entrusted with such an important task! He’ll go after the first deer he sees and gobbles it up, and he’ll forget all about the sun.”

Hearing the owl’s words, the animals had to agree. “That’s true,” they said. “Sure enough, the wolf is greedy and when he sees a deer he will stop to kill it, and forget about the Sun. But then, whom shall we send?”

“I’ll tell you,” said the owl. “If at all anyone has a chance of bringing back the Sun, it is the hare! He may not be big or strong, but he’s very swift on his feet and is not selfish like the bigger animals. He has a good chance of retrieving the Sun, for no one can catch him.”

Thus it was that the hare was chosen for this important mission. Without further ado, he set off on his journey, guided by the raven. He hopped and skipped for many days across the land until at last, he spied a shaft of light far ahead.

As he came closer, he perceived a ray of light coming from under the earth through a narrow crack. Creeping up to the crack, he put his eye to it.

To his delight, he could make out a ball of fire lying in a great white stone pot, its rays lighting up a vast underground cavern. He realized that he had found what he was looking for. That must be the Sun, he thought.

However, he realized that while the task of locating the sun had been accomplished, the harder part that of retrieving it from the cavern still lay ahead! How was he to do it?

Gathering all his courage, the little hare squeezed through the crack, let himself down on to the floor of the cavern and hopped over to where the ball of fire lay. Then he snatched it up from the stone pot and took a flying leap upwards through the crack.

The next moment, there was pandemonium. All at once, the evil spirits came swarming up the crack, raising a hue and cry, in hot pursuit of the hare!

The hare ran as fast as his legs would carry him. However, his pursuers were much faster, and it was long before they were almost upon him.

The hare thought fast. Just as they were about to grab him, he gave the ball of fire a hard kick with his hind legs, breaking it in two unequal parts. With a second kick, he sent the smaller part flying high into the air until it reached the heavens. And there, it became the gentle Moon.

Next, a third kick sent the bigger part flying even higher, so that it soared into another region of the sky to become the mighty Sun.

The earth was flooded with a bright light! Blinded by the glorious light and terrified, the evil spirits scampered back underground, never to appear on earth again. Tired but triumphant, the brave little hare ran back to the tundra, where he was hailed by all the animals, as the valiant hero who rescued the Sun. To this day, he holds a very special place among the animals of the tundra!

Moral of the story: ‘Do not judge a person by his size.’