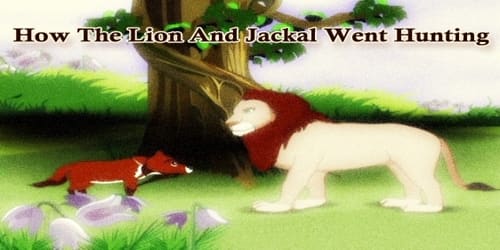 How The Lion And Jackal Went Hunting

Long, long ago, when the wilds of Africa abounded with animals of all kinds, life was not easy for the smaller animals. They had so many enemies all much stronger than them that they had to use all their wits to survive. One such clever little animal who outwitted all his foes, as you have already seen, was Kalulu the rabbit; another Bweha the jackal.

Now, Bweha was not a particularly good hunter, since he lacked the speed and the strength to track down and overpower his prey. However, he made up for this weakness by his cunning. He had an exceptionally smooth tongue and could talk his way out of every difficulty. He was also adept at flattery, and many a time used this gift to great advantage with the bigger animals.

On occasion, Bweha’s wife began scolding him, saying, “It’s more than a week now since you brought home any food, and I’m dying of hunger. You are a real good-for-nothing! Go and make arrangements for food at once!”

Bweha said, “What do you take me for? Just wait and see I shall go hunting with Simba the lion himself! Then there will be no limit to the meat I shall bring home!”

“Oh, really? Simba must be out of his mind if he takes you for a partner!” taunted his wife. Unfazed, Bweha merely asked her again to wait and see, before leaving the den.

He went to Simba and began flattering him. “Uncle Simba, you’re the strongest animal I ever saw! How powerful and sinewy your body is!” he exclaimed. “When you go into the jungle, all the animals scatter in terror! The sound of your booming voice is enough to set them trembling with fright! Who could dare stand up to you? Truly you’re the master of the entire jungle.”

He went on in this manner for a few more minutes. Then, when he had accomplished the task of bringing the lion into a good mood, he humbly asked, “Uncle Simba, when you go hunting, will you take me also along, please?”

“Whatever for? Are you going to hunt along with me?” asked Simba, laughing.

“Perish the thought! How can I presume to hunt along with you, as if I were your equal?” asked the jackal meekly. “No, Uncle Simba, I will merely be your servant to carry the meat and to eat your leavings!”

Soon they set off on the hunt together. Before long, the lion spotted a large buffalo, whom he cashed on to a high bank, overpowered and killed. It was a long and difficult hunt, for; the buffalo was a strong and bulky one. Needless to say, Simba did all the work, while the jackal was content to stand back and praise his valour and heroism!

By the time the buffalo was dead, the lion was tired, hot and thirsty. He badly wanted a drink of water.

“Bweha, I’m going down to the river for a drink,” he declared. “Guard my buffalo until I come back. And don’t you dare eat until I’ve returned and had my fill!”

“Of course not, Uncle Simba!” said Bweha, putting on a shocked expression. “You go in peace; I’ll look after the buffalo.”

Simba descended from the high bank into the river and began to drink. No sooner was his back turned than the sly jackal quietly removed the stone on which Simba had to step to climb back to the bank!

Next, Bweha ran to bring his wife. The two of them began feasting greedily upon the meat of the buffalo.

Meanwhile, Simba, having drunk his fill, tried to climb back up the steep bank but failed.

Bweha instantly appeared at the top, peeping down in apparent anxiety. “Don’t worry, Uncle Simba!” he called. “I will let down a rope with which you can climb up!”

Turning back, he ordered at the top of his voice, “Wife, get me a good strong rope of buffalo hide! Make sure it’s really strong so that Uncle Simba can climb up safely!” Aside, he whispered to her, “Give me the oldest and most worn-out rope you can find!”

His wife gave him an old rotten rope. Eating ravenously all the while, Bweha and his wife slowly let the rope down. Simba held on to the rope and began struggling up the steep bank. He had not climbed more than a quarter of the way when Bweha gave the rope a jerk. It broke and poor Simba tumbled all the way down, coming finally to lie near the river.

Now, Bweha began noisily thrashing a dry hide lying there. As he did so, he uttered realistic howls of pain and shouted, “Wife, how could you give me a weak rope that caused Uncle Simba to fall?”

Hearing the supposed fight between the couple, the lion roared from below, “Bweha, stop beating your wife and help me up at once!”

“Right away, Uncle Simba!” shouted Bweha. “I shall let down a good, strong rope. Wife, get me the best one you have, or else…!” He then turned to her and whispered, “Bring another thin old rope!”

She obliged, and he let the rope down. Simba began the climb. When he was halfway across, Bweha cut it with his teeth, so that it snapped in two and Simba tumbled down once again.

For the second time, Bweha began beating up the old hide, shouting, “Wife, didn’t I ask for a strong rope? How dare you give me another weak one?”

“Bweha!” bellowed Simba so loudly that the ground vibrated. “Stop beating your wife this instant and come and help me, or you’ll regret it!”

“Wife,” called out Bweha aloud, “Get me another rope, and this time make sure it’s a good strong one!” Then he whispered to her, “Give me the weakest one you can get!”

Bweha let down the third rope, and Simba began climbing on it. He had nearly reached the top when Bweha gave it a sudden jerk.

Snap! The rotten rope split in two. Poor Simba fell all the way to the ground to crash upon a rock, breaking his leg! He lay there, moaning in pain, unable to move or even call out. Meanwhile, the selfish Bweha and his wife ate their fill of the buffalo and ran away.

That was the day the lion decided never again to have a jackal for his hunting partner!

Moral of the story: ‘Never trust a known betrayer, however sweet his words.’