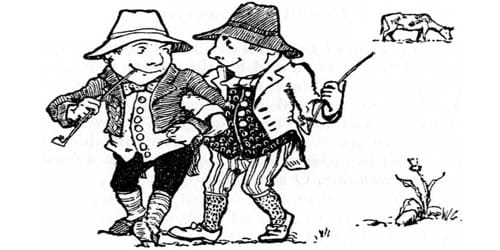 Once upon a time, a farmer named Donald O’Neary lived on a tiny strip of land between two large, prosperous farms. He owned a skinny cow named Daisy, and that was all.

The rich farmers were named Hudden and Dudden, and they owned goats and sheep and cattle and plenty of lands. Now you might think that Hudden and Dudden would be happy with all that they had. But they were greedy men. Each night Hudden and Dudden lay in bed thinking of ways to take away poor Donald O’Neary’s strip of land. At last, they poisoned Daisy, for they thought that if Donald lost Daisy, he would move away.

When Donald saw Daisy had died, he was sad. But he was no fool. “Well,” he said to himself, “she’s better off the way she is. She was always starving.” The next market day he carried Daisy’s hide to the village. Just before he reached the market, he cut a few slits in the hide, and in these slits, he placed every penny he owned. There were only a few.

In the village, Donald went to the finest inn and hung the hide upon the wall. “Bring me your best food, and don’t fear I won’t be paying you. Just look here,” Donald called to the innkeeper. He tapped Daisy’s hide with his stick and out hopped a penny. “You see, this hide of mine gives me all the money I want.”

You can imagine the innkeeper’s surprise. “What’ll you take for that hide?” he asked.

“It’s not for sale. It’s kept me and mine for years!” Donald tapped again, and out fell a second penny.

The innkeeper begged and pleaded. At last, Donald sold the hide and walked directly to his neighbor Hudden’s house. “Evening, Hudden. I want to borrow your scale to weigh my gold,” he said.

Hudden could not believe his ears. Donald O’Neary with gold? But anyway, first he smeared the scale with butter, and then he loaned it to Donald.

Back home Donald began to weigh the gold the innkeeper had paid him. When he returned the scale, a piece of gold was stuck to the butter.

Well, if Hudden was surprised before, he was more surprised now. He ran to Dudden’s place and told the whole tale. “He must have thousands!”

So they ran to Donald’s door.

“Evening, Hudden. Evening, Dudden,” Donald said, “Ah, you’ve done me a fine deed destroying my Daisy. Hides are worth their weight in gold these days.”

The next day at dawn Hudden and Dudden took a dozen hides of their own to market. “Hides to sell!” they called. “They’ll cost their weight in gold!”

No one wanted hides that cost so much.

When the innkeeper heard their claim, he was sure it was they who had cheated him the day before. He had tapped Daisy’s hide a thousand times, and not a single penny came out of that hide. He was furious, for he had paid for that hide with its weight in gold.

So the innkeeper chased Hudden and Dudden, calling out, “Catch those thieves!”

Hudden and Dudden ran and ran, and when they came to Donald O’Neary, Hudden cried, “Catch him!” They grabbed Donald and thrust him inside a big meal sack. They tied that sack uptight and started off for Brown Lake of the Bog. They planned to throw him in.

The place was far, and Hudden and Dudden were weary, so when they came to an inn by the roadside, they stopped to take a rest. They left the sack by the door of the inn, pretending it was just a big sack of potatoes. “Be still,” they warned Donald.

Soon Hudden and Dudden were inside singing, imagining how happy they would be when Donald O’Neary was down at the bottom of Brown Lake of the Bog. But when Donald heard a farmer driving his cattle past his sack, he cried out, “I won’t have her, I tell you!”

“And who won’t you have?” the farmer asked the talking sack.

“They’re forcing me to marry the king’s daughter. Imagine that. Oh, sure she’s rich and beautiful, but I don’t love her. Please help me escape.”

The farmer let Donald out, and he took his place, for he did not mind the idea of marrying the king’s daughter. “Take my herd of cattle in exchange,” the farmer said to Donald.

“Now lie still,” Donald said, “and remember, they’ll treat you like a vagabond because they’ll think you’re me and that you don’t want the king’s pretty daughter.”

When Hudden and Dudden came out, they pulled the sack to the lake, pitched it in and went home lighthearted.

No sooner had they arrived home than they saw Donald O’Neary surrounded by a herd of cows. Hudden stared. Dudden gaped. Donald shook their hands and said: “Thank you. You knew Brown Lake leads to land so full of fat cattle, I had to struggle to bring up this bunch.”

So Hudden and Dudden ran right back to the lake and jumped in.

But they never came back. Maybe they grew too fast, like the cattle down in deep Brown Lake, and they couldn’t swim up to the top.

But as for Donald O’Neary, he worked the land and took good care of his cattle all the rest of his days, and he lived very happily.