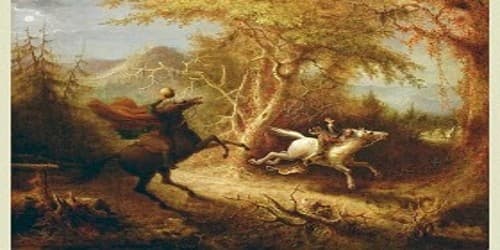 Ichabod Crane and the Headless Horseman

Ichabod Crane and the Headless Horseman (An American Legend)

Near the banks of the Hudson River, in a lush, drowsy valley, sits a dreamy little town known as Tarrytown, where the wonderful storyteller Washington Irving lived and died.

Some say the town earned its name from the tarrying habits of its inhabitants on market day. Some insist the town was originally called Tarwektown, which means Wheat Town. Whatever the source of its name, flowers bloom in abundance there, stars light the night sky, and meteors glare across the valley more often than they do other places. People say that spirits haunt the lush woods surrounding the town.

Among the many stories about Tarrytown and nearby Sleepy Hollow, there is one that is most famous. A Hessian soldier was killed there during a battle in the Revolutionary War. His wound was terrible, caused by cannonball fire. The poor soldier lost his head. He was buried, with his head, in a nearby graveyard.

For many years after the soldier’s death, people said that sometimes, in the middle of the night, especially when the moon was full and shining brightly, and when all the townspeople were fast asleep, the soldier would come out of his grave. They said the headless ghost mounted a horse and galloped through the countryside.

Many claimed they saw him. They said he carried his head beneath his arm as he rode, and when they saw this terrifying sight, they ran to their homes for safety. Those who had not seen him had heard his horse’s hooves clapping the paving stones. All through the night, people of Tarrytown said, they heard the pounding hooves and the horseman’s lonely whoop as he passed.

Now some years after the soldier died, a lanky schoolmaster named Ichabod Crane moved from Connecticut to Sleepy Hollow. He was an odd-looking fellow, with narrow shoulders, spidery limbs, huge ears, a long, skinny nose, and an even skinnier neck. He was stern, a man who did not spoil his pupils. He was mostly a loner, but sometimes he would help the local farmers with light labors, and then he would linger with the company on a porch. He also taught the locals how to sing their Psalms.

The women of the countryside admired him and invited him to share their tea and cakes. He would travel from house to house, inspiring gossip. After a while, the people noticed Ichabod Crane was frequenting the home of Farmer Van Tassel, whose daughter, Katrina, was a stout, red-cheeked girl who baked delicious pies and cakes. The townspeople began to notice that Ichabod was especially fond of sweet Katrina, preferring her sweets to any others’.

One evening Ichabod Crane paid Katrina a visit. So taken was he by Katrina’s charms, he did not notice the hours passing by. As he prepared to leave, he saw that darkness had enveloped the valley. He shivered nervously as he thought of his long, lonely walk home.

Katrina’s father, noticing the schoolmaster’s unease, offered a horse for the journey. Ichabod believed most of the ghost stories he heard, and so he happily accepted Farmer Van Tassel’s offer.

Mounting the nag, Ichabod set off along the dark roads. He trotted easily for a bit, but as he neared the graveyard, his palms began to sweat, for he was thinking of the headless horseman. To keep up his spirits, he began to hum Psalms. Then he dug his heels into the horse’s side and sped to a gallop, hoping he would not rouse the dead.

Suddenly he heard the dreaded sound of horse’s hooves pounding on the soft earth behind him. He turned, and when he did his hair stood on end and his heart began to pound so loudly he thought he might faint. He could barely breathe, for he saw the headless horseman coming over the ridge behind him, outlined as dark as ink against the starry sky.

He dug his heels still deeper. “Faster, nag,” he cried as he galloped toward Sleepy Hollow Bridge. The people said the ghost would never cross that bridge.

Ichabod’s coattails flapped in the summer wind. He was making a good time. In another minute he would reach the bridge and safety.

One step from the bridge, the soldier raced up right behind Ichabod, rose in his stirrups and threw his head at the schoolmaster’s back. Ichabod shrieked, fell from the horse and rolled into a tangle of brush at the river’s edge. There he lay, eyes closed.

The next morning a young farmer found Farmer Van Tassel’s tired horse grazing in a field near the bridge. Odder still, he found a smashed pumpkin in the bushes nearby. Another man who lived nearby claimed he had seen Mr. Crane striding quickly down the road toward New York. He had noticed yellowish stains on the back of the schoolmaster’s coat.

Ichabod Crane was never again seen in Tarrytown. Not long after that fateful night, Katrina Van Tassel married a brawny plowman named Brom Bones. Some folks say that Bones had more knowledge about the galloping Hessian than anyone else did, but Bones said everyone knew of the headless horseman. Everyone, he said, knew those tales of the midnight wanderings were all too true.

This story is from various sources, originating with Washington Irving’s “The Legend of Sleepy Hollow.”