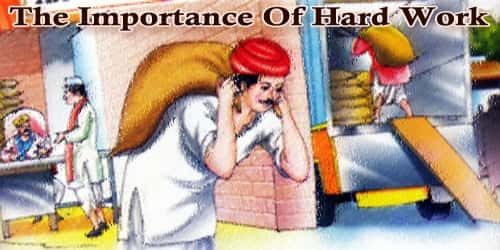 The Importance Of Hard Work

Palampur was a small village near Shimla. People of this village were ordinary workers and earned very little for their livelihood.

There was a railway station near the village, where a small market developed in due course of time. Ramlal was a poor laborer of this village and used to work in the market on daily wages. This was the only source of income for Ramlal and he had many liabilities to carry children’s education, food, clothes, etc. He had four children, but Bhola was the most notorious child of all. He had no interest in studies. He used to make several excuses for not going to school. Not only this, he preferred to eat chocolate, toffee and junk foods instead of homemade food. Every day he used to take money from his father giving one pretense or another and spend recklessly.

Ramlal was very much worried about his son Bhola who had such bad habits. One day, he took a strict decision to reform his son. He vowed not to give him any money from that day onwards.

The words of his father made Bhola sad. He came to the conclusion that the day was not good for him. In case he did not earn, he would not get the food in the evening.

He thought, ‘Where should I go? I must ask my mother for fifty rupees and this way today’s problem would be solved.’ So, he went to his mother and narrated the whole incident to her. The mother gave him fifty rupees. He ran to his father and gave him the money.

Ramlal understood that his son had not earned the money but had taken it from someone. Therefore, he asked his son to throw the note into a well. Bhola threw the money into the well.

Ramlal complained to him, “I had asked you to earn money on your own. Why did you take it from your mother? Go again and earn this amount yourself. In case you fail to earn fifty rupees, you will not get the food in the evening. Go and do just as I have told you.”

Ramlal commanded his son again, “Go and earn money yourself.” The bewildered son again went to his mother for money, but she refused. Then he went to his sister, but she also refused.

Bhola came out of the house. He was very sad and lost all hope. He sat on the road-side and started weeping. At this moment, a passerby asked him, “Why are you crying?” Bhola replied, “I need fifty rupees urgently. My father has told me to earn fifty rupees today. Failing this he will not allow me to take the meal in the evening.” “Right, you have to work and earn money. Nobody will pay you without work. Why don’t you go to the railway station and help the passengers carry their luggage.”

Then the man gave his own bag to the boy to carry it to the station and paid him twenty rupees. Encouraged by the job suggested by the stranger, Bhola helped other passengers in carrying their luggage to the railway platform and earned thirty rupees more by the evening. Now, he had fifty rupees in all. He quickly went home.

On reaching home, he handed those rupees to his father. But his father again asked him to throw the money into the well.

This time, Bhola did not throw the money away. Instead, he said to his father, “The money is not borrowed, but I’ve earned it through hard labor. I will not throw it into the well. I worked at the railway station carrying loads on my head. I did not hard labor so I cannot throw the money. I will rather keep it safe.” Hearing this, Ramlal patted his son with great affection. He further said, “I also earn money with hard labor and the same is wasted by you on useless items. I hope now you have understood the value of hard labor and money.” He continued to say, “It is praiseworthy that you did not lose hope and continued to make efforts to earn. Now you are supposed to study and get a good education to become a good citizen.”

Bhola was very happy. His confidence increased and he said, “I will work hard in life and never waste money. I will also try to become a good citizen.”