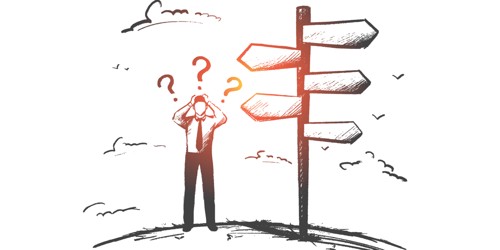 Here I’m writing a story about what I did when I found myself in a dilemma.

A dilemma is a conflict, problem, or situation with two possible solutions. It is a Greek word that means “double proposition,” or “perplexing situation,” which presents two different possibilities, both of which seem practically acceptable.

We were having a history lesson with Mrs. Lee. She was droning on and many of us must be feeling utterly bored. I, for one, was wishing that time would pass faster. Anyhow as she turned her back to write on the blackboard, I saw Becky throw a piece of chalk at her. The chalk hit her on the head. She turned around, picked up the chalk and looked at the class. “Who threw the chalk ?” she demanded.

Her eyes glared at us. “Now who did this ?” she demanded again. There was no answer.

She looked around the class and finally, her eyes stopped on me. She pointed her finger at me and said, “You, stand up and tell me who did it !”

I was in a dilemma. I did not know what to do but I remained quiet.

They stood up but incredibly nobody said anything. We were all in a dilemma. To tell the teacher was to betray our classmate, and to not tell her was to disobey her. Both choices were unpleasant.

We did not wait long at the office. The headmaster gave each of us a cut on the palm. I did not know whether I had done right or wrong I only knew that I did not know what to do when faced with the dilemma. Fortunately, I never had to face that again, because Becky stopped his mischief. He had to, for we would have bashed him up if he repeated it. Everyone goes through conflicts throughout their lives. Some people experience these conflicts when they are old and some come across their dilemmas when they are young.