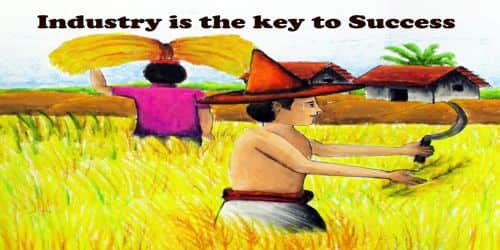 Industry Is The Key To Success

Once there was a farmer in a village. He was very idle. He had a few plots of land. But he did not plow them well. He did not sow seeds in time. As a result, he could not grow good crops. He did not eat well, did not live well and could not bear the educational expenses of his children.

There was another farmer whose land was close to him. He was very much active. He plowed his land well, sowed seeds in time and took care of them. As a result, he produced good crops every year. He ate well, lived well and sent his children who also made good results at school. The children of the lazy farmer pressed him. They told him to follow the example of his neighboring farmer. He then started working according to the request of his children and finally, he was able to lead a happy life.