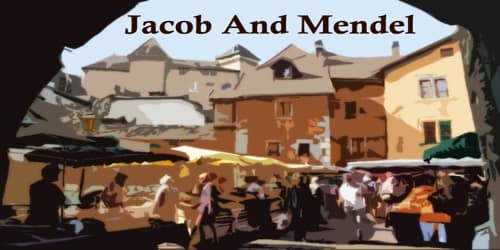 Once upon a time, there lived a kind merchant named Jacob who worked hard for his money and was careful to save every coin he could. Jacob was a simple man, but he was wise. Most people did not realize how wise he was because they saw only his ragged clothes. Jacob was modest. He did not like to brag. He did, though, know that he was a shrewd judge of people, and he always used his judgment in his trade.

When Jacob had managed to save 500 coins, he decided to travel to the city. There he intended to buy special things that he would bring home to sell in his village market.

He set off with great enthusiasm, but as he was nearing the outskirts of the city, he began to wonder if his money was safe. He had heard tales of city thieves, and he wondered if he ought to hide his sack of coins. Perhaps he ought to pretend he was only a poor beggar. That way he might be safe from thieves.

When he walked through the city gates and saw the bustling crowds, he decided he must, indeed, find a hiding place. “I am not accustomed to this kind of world,” he said to himself. “It would be best if I looked after myself without worrying about looking after my money.”

So he began to search for a place to hide his coins. He prowled the back roads and alleys, walking up this way and down that. At long last, he spotted a narrow alley. He looked to his right and then to his left. Not a soul in sight. “The perfect place,” he said, and he knelt down, dug a hole beneath the paving stones and placed his coins in there. Then he quickly covered it, marking the spot with a stack of twigs bound with string. Wiping his hands on his coat, he stood and set off for the market square.

Alas, Jacob had not noticed the hole in the wall beside the alley, and it was through this hole that Mendel spotted him. The moment Jacob had turned the corner; Mendel ran outside, dug up the bag and covered up the hole. “Ah, what a find!” he gloated as he ran back home.

Now Mendel prided himself on his wisdom. He had bragged to this one, and bragged to that one, and had convinced a great many people that he was very wise, but he had never earned a penny in an honest way, and he intended never to do so.

“So long as there are fools like that merchant, I will live happily ever after,” Mendel laughed to himself.

Several hours passed, and Jacob found a great many things he wished to purchase, so he set off to dig up his coins. He reached the hiding place, lifted the stones and began to dig. He dug and dug, but he soon realized that someone had stolen his bag. “How can this be?” he cried softly, and his heart sank at the thought of his loss, but he pulled himself together and said to himself, “I must think carefully. Wisdom will help me now.”

He sat quietly, thinking about how someone might have found his coins. And that was when he noticed the hole in the wall. “Ah,” he said, rubbing his beard. “I think I know where my money has gone.”

He walked out of the alley and approached Mendel’s house from the other side. He knocked upon the door. “Excuse me,” he said when Mendel answered, “but I am told that a very wise man lives in this house.”

“That is so,” Mendel said, beaming with pride.

“Well, then,” Jacob said, “perhaps you can help me. I have a serious problem, and I’m not certain how to solve it.”

“I will certainly try to help,” Mendel said solemnly. He knew Jacob was speaking of his coins.

“I am a merchant from a distant village,” Jacob said. “I came to this city with two bags of coins. One belongs to my son. It is filled with 500 coins, and I wanted to be sure I did not spend his money foolishly. So I have hidden his bag in a hole in the ground. I have been carrying my other bag, but it is so heavy. You see, it contains many more coins than that, and I wonder if you think there might be a safe place to put this while I look through the city. Do you think it would be wise to bury it with the other?”

“Take my good advice, sir,” Mendel said. “Don’t trust anyone. By all means, bury your bag, but make certain that you wait until midnight when all is dark so that no one will see your hiding place. There are thieves everywhere.”

“Thank you so much,” Jacob said. “I will do as you suggest this very night, and for now I shall look around the city.” And he waved farewell.

“Fool,” Mendel said gleefully when Jacob was gone, and naturally, he hastened to replace the bag of 500 coins. He laughed as he once again dug the hole. “The fool will leave me much more money tonight,” he chuckled; pleased at the way he had outsmarted the simple village merchant.

But Jacob was no fool, and that night, at midnight, he returned to the hole, dug up his bag of 500 coins, and returned home to his village with many fine things from his journey to the city. And he was contented to know that he was just as wise as any city man.