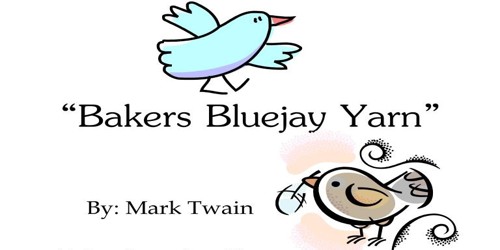 Animals talk to each other, of course. There can be no question about that, but I suppose there are very few people who can understand them. I never knew but one man who could. I knew he could, however, because he told me so himself. He was a middle-aged, simple-hearted miner who had lived in a lonely corner of California, among the woods and mountains, a good many years, and had studied the ways of his only neighbors, the beasts and the birds, until he believed he could accurately translate any remark which they made. This was Jim Baker. According to Jim Baker, some animals have only a limited education, and use only very simple words, and scarcely ever a comparison or a ﬂowery ﬁgure; whereas, certain other animals have a large vocabulary, a ﬁne command of language and a ready and ﬂuent delivery; consequently these latter talk a great deal; they like it; they are conscious of their talent, and they enjoy “showing off.” Baker said, that after long and careful observation, he had come to the conclusion that the blue-jays were the best talkers he had found among birds and beasts. Said he:—

“There’s more to a blue-jay than any other creature. He has got more moods and more different kinds of feelings than other creatures; and mind you, whatever a blue-jay feels, he can put into language. And no mere commonplace language, either, but rattling, out-and-out book-talk—and bristling with metaphor, too—just bristling! And as for command of language—why you never see a blue-jay get stuck for a word. No man ever did. They just boil out of him! And another thing: I’ve noticed a good deal, and there’s no bird, or cow, or anything that uses as good grammar as a blue-jay. You may say a cat uses good grammar. Well, a cat does—but you let a cat get excited, once; you let a cat get to pulling fur with another cat on a shed, nights, and you’ll hear grammar that will give you the lockjaw. Ignorant people think it’s the noise which ﬁghting cats make that is so aggravating, but it ain’t so; it’s the sickening grammar they use. Now I’ve never heard a jay use bad grammar but very seldom; and when they do, they are as ashamed as a human; they shut right down and leave.

“You may call a jay a bird. Well, so he is, in a measure—because he’s got feathers on him, and don’t belong to no church, perhaps; but otherwise, he is just as much a human as you be. And I’ll tell you why. A jay’s gifts, and instincts, and feelings, and interests, cover the whole ground. A jay hasn’t got any more principle than a Congressman. A jay will lie, a jay will steal, a jay will deceive, a jay will betray; and four times out of ﬁve, a jay will go back on his most solemn promise. The sacredness of an obligation is a thing that you can’t cram into no blue-jay’s head. Now on top of all this, there’s another thing: a jay can out-swear any gentleman in the mines. You think a cat can swear. Well, a cat can; but you give a blue-jay a subject that calls for his reserve-powers, and where is your cat? Don’t talk to me—I know too much about this thing. And there’s yet another thing: in the one little particular of scolding—just good, clean, out-and-out scolding—a blue-jay can lay over anything, human or divine. Yes, sir, a jay is everything that a man is. A jay can cry, a jay can laugh, a jay can feel shame, a jay can reason and plan and discuss, a jay likes gossip and scandal, a jay has got a sense of humor, a jay knows when he is an ass just as well as you do—maybe better. If a jay ain’t human, he better take in his sign, that’s all. Now I’m going to tell you a perfectly true fact about some blue-jays.”

“When I ﬁrst began to understand jay language correctly, there was a little incident happened here. Seven years ago, the last man in this region but me, moved away. There stands his house,—been empty ever since; a log house, with a plank roof—just one big room, and no more; no ceiling—nothing between the rafters and the ﬂoor. Well, one Sunday morning I was sitting out here in front of my cabin, with my cat, taking the sun, and looking at the blue hills, and listening to the leaves rustling so lonely in the trees, and thinking of the home away yonder in the States, that I hadn’t heard from in thirteen years, when a blue jay lit on that house, with an acorn in his mouth, and says, ‘Hello, I reckon I’ve struck something.’ When he spoke, the acorn dropped out of his mouth and rolled down the roof, of course, but he didn’t care; his mind was all on the thing he had struck. It was a knot-hole in the roof. He cocked his head to one side, shut one eye and put the other one to the hole, like a ’possum looking down a jug; then he glanced up with his bright eyes, gave a wink or two with his wings—which signiﬁes gratiﬁcation, you understand,—and says, ‘It looks like a hole, it’s located like a hole,—blamed if I don’t believe it is a hole!’

details—walked round and round the hole and spied into it from every point of the compass. No use. Now he took a thinking attitude on the comb of the roof and scratched the back of his head with his right foot a minute, and ﬁnally says, ‘Well, it’s too many for me, that’s certain; must be a mighty long hole; however, I ain’t got no time to fool around here, I got to ’tend to business; I reckon it’s all right—chance it, anyway.’

“So he ﬂew off and fetched another acorn and dropped it in, and tried to ﬂirt his eye to the hole quick enough to see what become of it, but he was too late. He held his eye there as much as a minute; then he raised up and sighed, and says, ‘Confound it, I don’t seem to understand this thing, no way; however, I’ll tackle her again.’ He fetched another acorn and done his level best to see what become of it, but he couldn’t. He says, ‘Well, I never struck any such a hole like this, before; I’m of the opinion it’s a totally new kind of a hole.’ Then he began to get mad. He held in for a spell, walking up and down the comb of the roof and shaking his head and muttering to himself; but his feelings got the upper hand of him, presently, and he broke loose and cussed himself black in the face. I never see a bird take on so about a little thing. When he got through he walks to the hole and looks in again for half a minute; then he says, ‘Well, you’re a long hole, and a deep hole, and a mighty singular hole altogether—but I’ve started into ﬁll you, and I’m d—d if I don’t ﬁll you if it takes a hundred years!’

“And with that, away he went. You never see a bird work so since you were born. He laid into his work like a nigger, and the way he hove acorns into that hole for about two hours and a half was one of the most exciting and astonishing spectacles I ever struck. He never stopped to take a look anymore—he just hove ’em in and went for more. Well, at last, he could hardly ﬂop his wings, he was so tuckered out. He comes a-drooping down, once more, sweating like an ice-pitcher, drops his acorn in and says, ‘Now I guess I’ve got the bulge on you by this time!’ So he bent down for a look. If you’ll believe me, when his head come up again he was just pale with rage. He says, ‘I’ve shoveled acorns enough in there to keep the family thirty years, and if I can see a sign of one of ’em I wish I may land in a museum with a belly full of sawdust in two minutes!’ “He just had strength enough to crawl up on to the comb and lean his back again the chimbly, and then he collected his impressions and begun to free his mind. I see in a second that what I had mistaken for profanity in the mines was only just the rudiments, as you may say.

“Another jay was going by, and heard him doing his devotions, and stops to inquire what was up. The sufferer told him the whole circumstance, and says, ‘Now yonder’s the hole, and if you don’t believe me, go and look for yourself.’ So this fellow went and looked, and comes back and says, ‘How many did you say you put in there?’ ‘Not any less than two tons,’ says the sufferer. The other jay went and looked again. He couldn’t seem to make it out, so he raised a yell, and three more jays come. They all examined the hole, they all made the sufferer tell it over again, then they all discussed it, and got off as many leather-headed opinions about it as an average crowd of humans could have done.

“They called in more jays; then more and more, till pretty soon this whole region ’peared to have a blue ﬂush about it. There must have been ﬁve thousand of them; and such another jawing and disputing and ripping and cussing, you never heard. Every jay in the whole lot put his eye to the hole and delivered a more chuckle-headed opinion about the mystery than the jay that went there before him. They examined the house all over, too. The door was standing half open, and at last one old jay happened to go and light on it and look in. Of course, that knocked the mystery galley-west in a second. There lay the acorns, scattered all over the ﬂoor. He ﬂopped his wings and raised a whoop. ‘Come here!’ he says, ‘Come here, everybody; hang’d if this fool hasn’t been trying to fill up a house with acorns!’ They all came a-swooping down like a blue cloud, and as each fellow lit on the door and took a glance, the whole absurdity of the contract that that ﬁrst jay had tackled hit him home and he fell over backward suffocating with laughter, and the next jay took his place and done the same.

“Well, sir, they roosted around here on the house-top and the trees for an hour and guffawed over that thing like human beings. It ain’t any use to tell me a blue-jay hasn’t got a sense of humor, because I know better. And memory, too. They brought jays here from all over the United States to look down that hole, every summer for three years. Other birds too. And they could all see the point, except an owl that comes from Nova Scotia to visit the Yo Semite, and he took this thing in on his way back. He said he couldn’t see anything funny in it. But then he was a good deal disappointed about Yo Semite, too.”