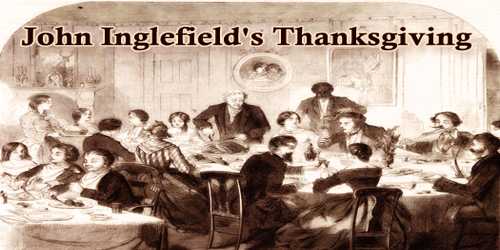 On the evening of Thanksgiving Day, John Inglefield, the blacksmith, sat in his elbow-chair among those who had been keeping festival at his board. Being the central figure of the domestic circle, the fire threw its strongest light on his massive and sturdy frame, reddening his rough visage so that it looked like the head of an iron statue, all aglow, from his own forge, and with its features rudely fashioned on his own anvil.

At John Inglefield’s right hand was an empty chair. The other places round the hearth were filled by the members of the family, who all sat quietly, while, with a semblance of fantastic merriment, their shadows danced on the wall behind them.

One of the group was John Inglefield’s son, who had been bred at college, and was now a student of theology at Andover. There was also a daughter of sixteen, whom nobody could look at without thinking of a rosebud almost blossomed. The only other person at the fireside was Robert Moore, formerly an apprentice of the blacksmith, but now his journeyman, and who seemed more like an own son of John Inglefield than did the pale and slender student. Only these four had kept New England’s festival beneath that roof. The vacant chair at John Inglefield’s right hand was in memory of his wife, whom death had snatched from him since the previous Thanksgiving. With a feeling that few would have looked for in his rough nature, the bereaved husband had himself set the chair in its place next his own; and often did his eye glance hitherward, as if he deemed it possible that the cold grave might send back its tenant to the cheerful fireside, at least for that one evening. Thus did he cherish the grief that was clear to him. But there was another grief which he would fain have torn from his heart; or, since that could never be, have buried it too deep for others to behold, or for his own remembrance. Within the past year another member of his household had gone from him, but not to the grave. Yet they kept no vacant chair for her.

While John Inglefield and his family were sitting round the hearth with the shadows dancing behind them on the wall, the outer door was opened, and a light footstep came along the passage. The latch of the inner door was lifted by some familiar hand, and a young girl came in, wearing a cloak and hood, which she took off and laid on the table beneath the looking-glass. Then, after gazing a moment at the fireside circle, she approached, and took the seat at John Inglefield’s right hand, as if it had been reserved on purpose for her.

“Here I am, at last, father,” said she. “You ate your Thanksgiving dinner without me, but I have come back to spend the evening with you.”

Yes, it was Prudence Inglefield. She wore the same neat and maidenly attire which she had been accustomed to put on when the household work was over for the day, and her hair was parted from her brow in the simple and modest fashion that became her best of all. If her cheek might otherwise have been pale, yet the glow of the fire suffused it with a healthful bloom. If she had spent the many months of her absence in guilt and infamy, yet they seemed to have left no traces on her gentle aspect. She could not have looked less altered had she merely stepped away from her father’s fireside for half an hour, and returned while the blaze was quivering upward from the same brands that were burning at her departure. And to John Inglefield she was the very image of his buried wife, such as he remembered on the first Thanksgiving which they had passed under their own roof.

Therefore, though naturally a stern and rugged man, he could not speak unkindly to his sinful child, nor yet could he take her to his bosom.

“You are welcome home, Prudence,” said he, glancing sideways at her, and his voice faltered. “Your mother would have rejoiced to see you, but she has been gone from us these four months.”

“I know, father, I know it,” replied Prudence quickly. “And yet, when I first came in, my eyes were so dazzled by the firelight that she seemed to be sitting in this very chair!”

By this time, the other members of the family had begun to recover from their surprise, and became sensible that it was no ghost from the grave, nor vision of their vivid recollections, but Prudence, her own self. Her brother was the next that greeted her. He advanced and held out his hand affectionately, as a brother should; yet not entirely like a brother, for, with all his kindness, he was still a clergyman and speaking to a child of sin.

“Sister Prudence,” said he, earnestly, “I rejoice that a merciful Providence hath turned your steps homeward in time for me to bid you a last farewell. In a few weeks, sister, I am to sail as a missionary to the far islands of the Pacific. There is not one of these beloved faces that I shall ever hope to behold again on this earth. Oh, may I see all of them yours and all beyond the grave!”

A shadow flitted across the girl’s countenance.

“The grave is very dark, brother,” answered she, withdrawing her hand somewhat hastily from his grasp. “You must look your last at me by the light of this fire.”

While this was passing, the twin girl the rosebud that had grown on the same stem with the castaway stood gazing at her sister, longing to fling herself upon her bosom, so that the tendrils of their hearts might intertwine again.

At first she was restrained by mingled grief and shame, and by a dread that Prudence was too much changed to respond to her affection, or that her own purity would be felt as a reproach by the lost one. But, as she listened to the familiar voice, while the face grew more and more familiar, she forgot everything save that Prudence had come back. Springing forward she would have clasped her in a close embrace. At that very instant, however, Prudence started from her chair and held out both her hands with a warning gesture.

“No, Mary, no, my sister,” cried she, “do not you touch me! Your bosom must not be pressed to mine!”

Mary shuddered and stood still, for she felt that something darker than the grave was between Prudence and herself, though they seemed so near each other in the light of their father’s hearth, where they had grown up together.

Meanwhile Prudence threw her eyes around the room in search of one who had not yet bidden her welcome. He had withdrawn from his seat by the fireside and was standing near the door, with his face averted so that his features could be discerned only by the flickering shadow of the profile upon the wall. But Prudence called to him in a cheerful and kindly tone:

“Come, Robert,” said she, “won’t you shake hands with your old friend?”

Robert Moore held back for a moment, but affection struggled powerfully and overcame his pride and resentment; he rushed toward Prudence, seized her hand, and pressed it to his bosom.

“There, there, Robert,” said she, smiling sadly, as she withdrew her hand, “you must not give me too warm a welcome.”

And now, having exchanged greetings with each member of the family, Prudence again seated herself in the chair at John Inglefield’s right hand. She was naturally a girl of quick and tender sensibilities, gladsome in her general mood, but with a bewitching pathos interfused among her merriest words and deeds. It was remarked of her, too, that she had a faculty, even from childhood, of throwing her own feelings like a spell over her companions. Such as she had been in her days of innocence, so did she appear this evening. Her friends, in the surprise and bewilderment of her return, almost forgot that she had ever left them, or that she had forfeited any of her claims to their affection.

In the morning, perhaps, they might have looked at her with altered eyes, but by the Thanksgiving fireside they felt only that their own Prudence had come back to them, and were thankful. John Inglefield’s rough visage brightened with the glow of his heart, as it grew warm and merry within him; once or twice, even, he laughed till the room rang again, yet seemed startled by the echo of his own mirth. The brave young minister became as frolicsome as a schoolboy. Mary, too, the rosebud, forgot that her twin-blossom had ever been torn from the stem and trampled in the dust. And as for Robert Moore, he gazed at Prudence with the bashful earnestness of love new-born, while she, with sweet maiden coquetry, half smiled upon and half discouraged him.

In short, it was one of those intervals when sorrow vanishes in its own depth of shadow, and joy starts forth in transitory brightness. When the clock struck eight, Prudence poured out her father’s customary draught of herb tea, which had been steeping by the fireside ever since twilight.

“God bless you, child,” and said John Inglefield, as he took the cup from her hand; “you have made your old father happy again. But we miss your mother sadly, Prudence, sadly. It seems as if she ought to be here now.”

It was now the hour for domestic worship. But while the family were making preparations for this duty, they suddenly perceived that Prudence had put on her cloak and hood, and was lifting the latch of the door.

“Prudence, Prudence! Where are you going?” cried they all with one voice.

As Prudence passed out of the door, she turned toward them and flung back her hand with a gesture of farewell. But her face was so changed that they hardly recognized it. Sin and evil passions glowed through its comeliness, and wrought a horrible deformity; a smile gleamed in her eyes, as of triumphant mockery, at their surprise and grief.

“Daughter,” cried John Inglefield, between wrath and sorrow, “stay and be your father’s blessing, or take his curse with you!”

For an instant Prudence lingered and looked back into the fire-lighted room, while her countenance wore almost the expression as if she were struggling with a fiend who had power to seize his victim even within the hallowed precincts of her father’s hearth. The fiend prevailed, and Prudence vanished into the outer darkness. When the family rushed to the door, they could see nothing, but heard the sound of wheels rattling over the frozen ground.

That same night, among the painted beauties at the theatre of a neighboring city, there was one whose dissolute mirth seemed inconsistent with any sympathy for pure affections, and for the joys and griefs which are hallowed by them. Yet this was Prudence Inglefield. Her visit to the Thanksgiving fireside was the realization of one of those waking dreams in which the guilty soul will sometimes stray back to its innocence.

But Sin, alas! Is careful of her bondslaves; they hear her voice, perhaps, at the holiest moment, and are constrained to go whither she summons them. The same dark power that drew Prudence Inglefield from her father’s hearth the same in its nature, though heightened then to a dread necessity would snatch a guilty soul from the gate of heaven, and make its sin and its punishment alike eternal.