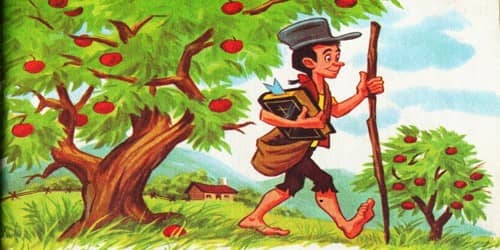 Once upon a time during a terrific rainstorm in Massachusetts, a miraculous event took place, or so people say. The sky, purple and dark, was streaked with lightning and thunder boomed across the land. Rain fell heavily.

In the little village of Ipswich, a baby boy was born, and people say that the moment he took his first breath, the rain stopped falling, the sun broke through the clouds and a glorious rainbow appeared. People say that one end of the rainbow was hooked to Mount Monadnock, and it arched clear across the sky into the yard of the Chapman house where little Johnny was born. There, they say, the rainbow tangled itself up in a big apple tree, and the blossoms on that tree turned every color of the rainbow.

People say that little Johnny looked at those blossoms and from that moment on, he was a very special child.

Some people don’t believe that story, but everyone says it is certainly true that when Johnny was a baby he whooped with joy whenever he touched an apple blossom, and once he held that blossom in his hand, he sniffed it and then smiled like an angel.

When Johnny grew older, his mother took him into the woods and introduced him to all the plants and creatures. Before long, Johnny was in love with every one of those flowers and animals. By the time he was a young lad, the people from all over the county knew that Johnny was never happier than when he could take care of any little animal, even if it happened to be a skunk.

Whenever any animal in the neighborhood broke its leg or fell sick, the neighbors brought it right to Johnny’s door, and Johnny would give it medicine he had mixed together from herbs and roots. Soon the animal would perk right up and be healthy as ever. Johnny’s cures, people said, worked every time.

Now after a while, Johnny’s family moved to Pennsylvania. No one is quite sure just what happened down there to make Johnny think up his strange and wonderful plan. Some people think he was always a little crazy; they say that maybe he was kicked in the head by a horse. Some say some young woman broke his heart, and that sent him looking for another kind of happiness. And some say he came down with a terrible case of malaria and suffered from a long feverish spell. Others say all three of those things are true.

But whatever it is that happened to Johnny down there in Pennsylvania, he suddenly came up with his idea, and he called it a mission.

Johnny thought there ought to be more apple trees everywhere in the country, and he decided it was up to him to spread those apple trees.

Right away that autumn at a cider-making time, Johnny went down to the cider presses. He began to collect all the mashed-up stuff that was leftover after the juice was squeezed out of the apples. The farmers called the juice pomace, and that’s just what Johnny collected. He would gather it up and wash out all the seeds. Then he set those seeds to dry under the bright autumn sun.

Next, he took all those seeds and bagged them up in flour sacks and handmade leather pouches and whatever else he could find to hold them. And Johnny began to hike westward, carrying his big bags of seeds along with him.

All the time he traveled, Johnny spread his apple seeds. Sometimes he handed out the seeds to travelers he met along the way. Sometimes he just dropped those seeds by the banks of a river, or in an empty meadow, or in a tiny little yard.

But no matter where he went, Johnny spread those apple seeds. Before long, people began to call him Johnny Appleseed — and that’s the name that stuck with him.

Johnny Appleseed traipsed all over the country. Usually, he slept out in the open, under the wide skies, rain or shine. Sometimes when the weather was cold, he climbed into a hollow log to sleep. While Johnny was traveling, he ate whatever he could find. He nibbled on berries and seeds and roots and fruits, and wherever he went, he saw to it that he planted his apple seeds.

Over the years, Johnny Appleseed made his way as far south as Tennessee and as far west as the Rocky Mountains, but his seeds traveled even farther because Johnny gave them to the pioneers heading west. So Johnny’s apple seeds were planted over the whole country.

When people tried to pay Johnny for his work, he would grin and say, “No thanks. I’m on a mission.” Then off he would go, giving away his seeds.

Every now and then he would accept some gift. Sometimes people gave him little plots of land, and he would use those plots to plant orchards. As the years passed, apple orchards grew all along the shores of Lake Erie and Lake Superior, along the Finger Lakes, and near hundreds of other rivers and lakes and streams.

Farmers everywhere knew Johnny. Many times they helped him along in his quest. They would give him their best Pippin and Seek No Furthers and McIntosh and every other kind of apple under the sun. And sometimes they even gave him cuttings from their other fruit trees, from pear and peach and plum.

Johnny’s smile was bright and he told marvelous tales, and wherever he wandered, he told others of all the wonders he had seen on his journeys. People welcomed Johnny into their homes, and sometimes they even managed to convince him to spend the night in a nice soft bed, warmed by the fire.

Wherever Johnny Appleseed roamed, apple orchards grew up thick and strong. In the springtime, the trees were rich with blossoms. In the autumn their fruit swelled plump and ripe.

Back in Massachusetts and Pennsylvania, people began to tell stories about Johnny Appleseed. Pretty soon those stories spread across the country, just the way Johnny’s apple seeds spread, and even though Johnny isn’t traveling still, his apple trees live on, and so do the stories about him.