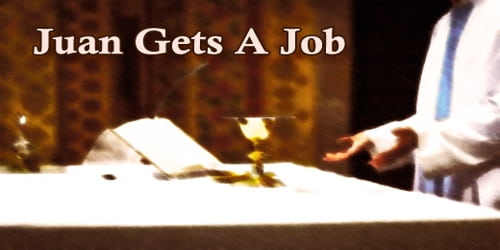 Juan Gets A Job

There once lived in a city a young man named Juan. Though a fool, he was reputed to be a brave man. Many thought that he was so courageous only because he lacked the intelligence to understand the enormity of problems, however frightful they were.

But Juan could not get any job because he was foolish. Even if he got one sometimes, he lost his job soon as his employers found out that he was too foolish to carry out any task.

Now, the governor and the priest of that city had heard about the courage of Juan. One day, as both of them, were having a conversation about him, they decided to test Juan’s courage to find out whether he was as brave as he was told to be.

The next day, they called Juan to the church. Just before Juan arrived, the governor hid the priest in a chamber. When Juan came inside the church, he found only the governor waiting for him. The young man smiled and walked up to him. The governor received him warmly and said,

“Well Juan, I have a job for you. The priest has died just an hour ago and I want you to keep a watch over his body in the church tonight. Will you be interested?”

Juan at once gave his consent and agreed to carry out the task.

“It will be an honor for me to look after the dead body of our priest. I am ready to obey your orders, sir. But I am in dire need of some money as I do not have any job.” he said.

“I assure you that you will get a bag of a hundred gold coins for your services. And if you do your job well, I will also get you a job.” the governor assured Juan. “See that the priest’s corpse remains in the church till the time for his burial comes.”

So that night, the priest lay down on the bier before the altar. When night fell, Juan came on time to carry out his duties. Foolish as he was, he did not know that the priest was still alive, hale and hearty as ever.

Some minutes after Juan arrived; the priest arose from his position and began laughing at him like a ghost.

Juan was shocked to find the priest alive. He was dumbfounded for some minutes. Then he said,

“Lie down again. The governor has told me that you should lie here till you are buried.”

But the mischievous priest was bent on scaring Juan out of his mind. He continued to remain seated and went on laughing as before.

When his repeated requests and orders failed, Juan ran out of the church. The priest thought that he had succeeded in scaring the young man away. But how wrong he was for Juan returned within minutes of his departure. He had secured a club from somewhere and he threatened to strike the priest if he did not obey his orders.

“You are dead; try to get up again and I will clobber you to a pulp. Lie down! Now!”

Thus threatened, the priest lied down and waited for the governor to come in the morning. When the governor arrived, he got up and told him of all that had happened at night. Both of them told of their plan to an astonished Juan, who was already surprised to see the priest really alive.

“We admire your courage Juan.” the governor told Juan, “we tried to test you and you have won.”

Both of them understood that Juan was a fool, but they could not deny that he was indeed a brave young man and was ready to carry out his task despite the most frightening circumstances. They rewarded him with a bag filled with gold coins.

“Would you like to be a soldier?” the governor asked Juan, “The country needs brave people like you.”

So from that day, Juan became a soldier. All his life, he valiantly fought many battles, served his motherland and won many awards and accolades for his bravery. But he remained as foolish as ever and could not understand simple things like we do.