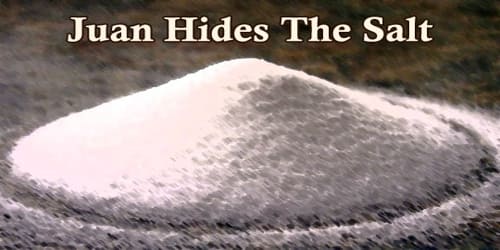 Once upon a time, there lived a very foolish boy named Juan. In the village where he lived, there was none more foolish than this boy and his parents always worried about how Juan would take care of himself after they passed away from this world.

One day, Juan’s father somehow came across a sack of salt. In those days, salt used to be a very precious and expensive commodity. So Juan’s father thought that he should hide it in some safe place so that they could take it out whenever needed and sell it or use it themselves.

When he reached home with the sack, he called Juan and said to him,

“Look, son, this is a sack of salt. I want you to hide it in someplace where it will remain safe and only we can take it out whenever we want.”

“I know of such a place, father. Don’t you worry for I will hide this well.”

His father relied on him and handed him the sack. Juan carried the sack out of the house and went near the woods nearby. He stopped by a pool where the wild animals came to drink water. He hid the sack in the waters and went away to his home.

When the time to sell the sack came near, his father asked him where he had hide the sack. Juan replied,

“It is an absolutely safe father. Do you want to see where it is?”

His father asked, “Is it somewhere close?”

“Yes. Just some distance away from our home.” Juan replied.

“Let us get it then,” said his father. And both of them went out to bring back the sack.

Imagine how horrified the poor father was when he found that his foolish son had hidden the sack in the waters. As you must be knowing, water dissolves the salt completely. Naturally, when the sack was taken out, nothing was to be found inside.

And so, the poor father and son lost the opportunity of making some good income because of Juan’s foolishness.