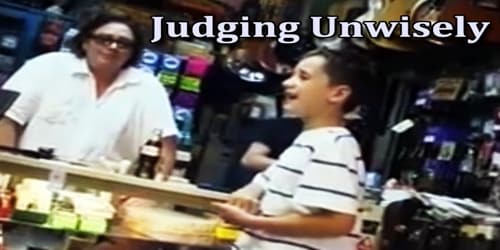 Many years ago a man rented a store upon a street appropriately named Market Street. While very busy getting barrels, boxes and other things in the side, he happened to see a boy of eleven years standing by, and called to him, “See here, boy, if you’ll help me today, I’ll pay you well.” The boy looked at him but made no answer. “Don’t you want to work?” The boy made some sort of gesture but remained silent. “Oh! You’re some idler, I guess. Well, if you won’t work or even speak, just pass along about your business.” He thought the boy’s lounging attitude and continued silence meant disrespect and defiance, and soon began to feel irritated over it

“Some young thief, I guess, watching his chance to steal something and run,” thought he. Presently he advanced toward the boy with a threatening look, when, to his amazement, the offender performed some peculiar gesture, and strange play of features, as he retreated backward.

“I’ll teach you how to make faces and mock me; you’ve acted the nuisance long enough.” And without further delay, he raised his hand, when the boy, instead of running off, started and fell in a heap upon the sidewalk. Several persons hastened to the spot and inquired what the matter was. “Why! that lazy fellow refused work when I offered him pay and hung around even when I ordered him off, and finally made faces and disrespectful gestures at me; so I was going to slap him and he dropped like that. He is not hurt enough to even cry about it.” “Sir that is poor Danny, a deaf-mute and cripple, perfectly inoffensive when you know him. We all humor him and let him stay around as long as he pleases, for his eyes are the chief blessings he possesses, and they can’t injure anything.”

When they lifted Danny, they found a bruise upon his forehead, and tears were slowly creeping down his cheeks. He was carried into a store, and one of his friends who understood how to communicate with him explained the merchant’s mistake. You may be sure the man was heartily ashamed and so anxious to prove his repentance that he did all in his power to relieve poor Danny’s adversity and affliction.

Drawing materials, also white blocks of softwood and patterns, with suitable tools, were furnished, and very often the merchant walked down to the plain house where Danny lived, and often, also, he took the lonely boy for a ride by carriage or railway. A comfortable chair and table with drawers, then by a cabinet to hold Danny’s works of art, transformed the plain room into an interesting one. The patient mother was very grateful to the new friend and justly proud of her boy’s work; and a pleasant picture they made, sitting in winter beside their glowing fire, with her sewing and Danny busy at his work-table. But for all this good result, the merchant said often: “If I had only known the truth, had not been so hasty in judgment, I might have done as much good without having done any injury.”