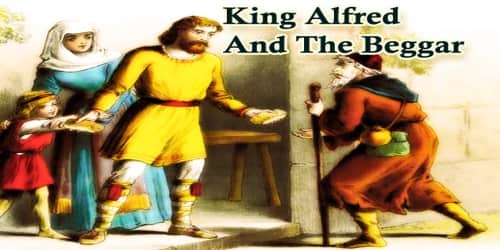 King Alfred And The Beggar

At one time the Danes drove King Alfred from his kingdom, and he had to lie hidden for a long time on a little island in a river.

One day, all who were on the island, except the king and queen and one servant, went out to fish. It was a very lonely place, and no one could get to it except by a boat. About noon a ragged beggar came to the king’s door and asked for food.

The king called the servant, and asked, “How much food has us in the house?”

“My lord,” said the servant, “we have only one loaf and a little wine.”

Then the king gave thanks to God, and said, “Give half of the loaf and half of the wine to this poor man.”

The servant did as he was bidden. The beggar thanked the king for his kindness and went on his way.

In the afternoon the men who had gone out to fish came back. They had three boats full of fish, and they said, “We have caught more fish today than in all the other days that we have been on this island.”

The king was glad, and he and his people were more hopeful than they had ever been before.

When night came, the king lay awake for a long time and thought about the things that had happened that day. At last, he fancied that he saw a great light like the sun; and in the midst of the light there stood an old man with black hair, holding an open book in his hand.

It may all have been a dream, and yet to the king, it seemed very real indeed. He looked and wondered, but was not afraid.

“Alfred, my son, be brave,” said the man; “for I am the one to whom you gave this day the half of all the food that you had. Be strong and joyful of heart, and listen to what I say. Rise up early in the morning and blow your horn three times, so loudly that the Danes may hear it. By nine o’clock, five hundred men will be around you ready to be led into battle. Go forth bravely, and within seven days your enemies shall be beaten, and you shall go back to your kingdom to reign in peace.”

Then the light went out, and the man was seen no more.

In the morning the king arose early and crossed over to the mainland. Then he blew his horn three times very loudly, and when his friends heard it they were glad, but the Danes were filled with fear.

At nine o’clock, five hundred of his bravest soldiers stood around him ready for battle. He spoke, and told them what he had seen and heard in his dream; and when he had finished, they all cheered loudly, and said that they would follow him and fight for him so long as they had strength.

So they went out bravely to battle, and they beat the Danes, and drove them back into their own place. And King Alfred ruled wisely and well over all his people for the rest of his days.