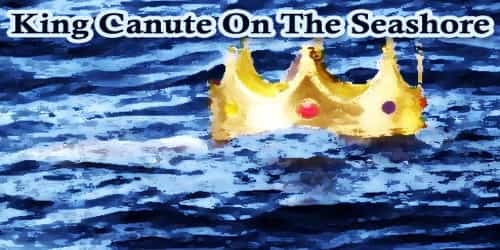 King Canute On The Seashore

A hundred years or more after the time of Alfred the Great there was a king of England named Canuté. King Canute was a Dane, but the Danes were not so fierce and cruel then as they had been when they were at war with King Alfred.

The great men and officers who were around King Canute were always praising him.

“You are the greatest man that ever lived,” one would say.

Then another would say, “O king! There can never be another man as mighty as you.”

And another would say, “Great Canute, there is nothing in the world that dares to disobey you.”

The king was a man of sense, and he grew very tired of hearing such foolish speeches.

One day he was by the sea-shore, and his officers were with him. They were praising him, as they were in the habit of doing. He thought that now he would teach them a lesson and so he bade them set his chair on the beach close by the edge of the water.

“Am I the greatest man in the world?” he asked.

“Do all things obey me?” he asked.

“There is nothing that dares to disobey you, O king!” they said. “The world bows before you, and gives you honor.”

“Will the sea obey me?” he asked, and he looked down at the little waves which were lapping the sand at his feet.

The foolish officers were puzzled, but they did not dare to say “No.”

“Sea,” cried Canute, “I command you to come no farther! Waves, stop your rolling, and do not dare to touch my feet!”

But the tide came in, just as it always did. The water rose higher and higher. It came up around the king’s chair, and wet not only his feet but also his robe. His officers stood about him, alarmed, and wondering whether he was not mad.

Then Canute took off his crown and threw it down upon the sand.

“I shall never wear it again,” he said. “And do you, my men, learn a lesson from what you have seen. There is only one King who is all-powerful, and it is he who rules the sea, and holds the ocean in the hollow of his hand. It is he whom you ought to praise and serve above all others.”