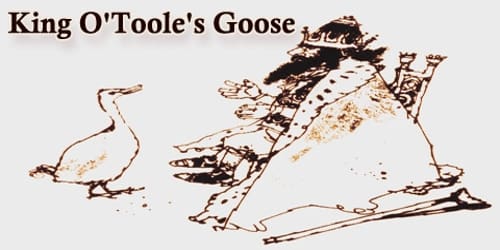 In ancient times, in the midlands of Ireland, there lived a king whose name was O’Toole. He was a good man and a good sportsman as well. He loved a good hunt, and from dawn to dusk, he hunted in the mountains, having a merry old time.

Alas, even good kings grow old, and when King O’Toole became too stiff and unsteady to romp about in those green hills, he wondered what would become of him. His heart was growing weak, but soon he decided he would get himself a goose as a pet. That’s right. King O’Toole chose a goose to distract him.

And this is how things went, you see. King O’Toole’s goose was a sportsman too, and on Fridays, she would swim across the lake and dive for trout to feed the good king. On other days the goose flew around the lake, entertaining the king with her antics, reminding him of his days of wandering and play.

Everything was fine for several years, but geese grow old, too, and after a while, the goose grew too stiff to swim and too weak to fly, and so poor King O’Toole no longer had a goose to distract him with her fishing and her flying.

One morning he was walking by the lake complaining about his poor state and crying, “Woe is me, woe is me,” when a sturdy young man appeared before him.

“I am King O’Toole,” said the startled king, “but how on God’s green earth did you know that?”

“Never mind,” said the lad who was, in truth, no lad at all. He was the hermit Saint Kavin, disguised as a lad. And naturally, because he was a saint, he knew everything there was to know about the king. And so he asked, “How is your goose, King O’Toole?”

“Now how do you know about my goose?” asked the befuddled king.

Well, this stranger had caught the king’s attention and was proving to be diverting himself. “Who are you?” asked the king.

“An honest man,” answered the saint.

“Well, then, how do you make your money, honest man?”

The saint smiled at the king’s curiosity. “Why, I make old things as good as new.”

Saint Kavin laughed. “No, not exactly a tinker,” he said. “But I can make things good as new. Even your goose.”

When the king heard that, he was overjoyed, for he loved that old goose, and he let out a long, low whistle the signal for the goose to come to him.

Just like that, the tired old goose, hearing his master’s whistle, began to trundle toward him as fast as her aching legs would carry her.

When she appeared, Saint Kavin looked her up and down and said, “I can make her good as new, indeed I can. But naturally, there’s a price attached.”

“Whatever you ask,” answered the king, for he was certainly fair, and nothing in the world could be too much to pay for his beloved goose.

“I shall offer you a bargain, King O’Toole,” said the saint. “Give me all the land your goose flies over in exchange for my making her as good as new.”

“Sounds fair enough,” answered the king, but he was chuckling to himself, for he knew how weak and tired his poor goose was. She would never fly far.

“You’ll keep your word then, will you, king?” asked the wary Saint Kavin.

“Indeed I will,” answered the king.

So Saint Kavin crouched down and called to the goose. “Come here with you, you unfortunate old girl, and I’ll make you a fine young thing again.”

When the goose was near, he took her by the wings, made the sign of the cross over her and tossed her into the air. To offer a little extra wind, he blew on her, and to the king’s amazement, his goose took off. Up she flew, high as the eagles, swooping and swirling like the limber swallows, diving like the cormorants. She was swift and sure and strong, and so pleased was she with her new strength; she flew and flew and flew.

Well, that was a beautiful sight to old King O’Toole. He stood there with his mouth wide open watching his goose, which was stronger than she ever had been. When at long last she landed at his feet, he patted her head and offered her kisses.

“And you owe me all the ground the goose flew over,” said the saint.

“I gave my word,” said King O’Toole, “and so it’s yours, though this is the last of anything in the world I have to give.”

The saint smiled again, and this time he said, “it’s good you keep your word, King O’Toole,” and that’s when he showed the king exactly who he was, no mere lad but a saint. “I came here to test you,” the saint confessed. “And you have passed.”

King O’Toole fell to his knees before the saint. “And all this time I thought I was talking only to a decent lad.”

“Now you know,” the saint told him.

And so keeping his word served King O’Toole well, for he had a goose as fit as ever, and that goose delighted him for many more years. Alas, one Friday, when the goose thought he was catching a trout, he caught a horse-eel instead, and that horse-eel killed the goose, and not long afterward old King O’Toole died too, with the saint still at his side.