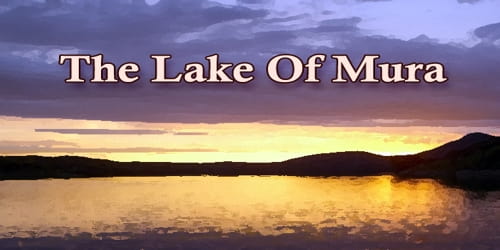 The Lake Of Mura

This is a folk tale of ancient times. There was a dense forest in a country. A woodcutter lived in a village near the forest with his mother. He was known by the name of Kushimura of Kushi in short. He used to go to the forest daily to cut wood and then made toys out of them. Thereafter, he sold the toys in the market.

Kushi bowed to the god and said, “Oh god! I do not want anything for myself, but I do want a lake for the villagers that would help them to earn a living.” The god said, “All right! As you like,” and disappeared.

The next day when Kushi went to the forest, he was happy to see a beautiful lake there. But when he was going to sell the toys, he saw a boatman with his boat in the lake. The boatman said to him, “The god has sent me to help you. Sit in the boat. I will take you across the lake.” Kushi sat in the boat and crossed the lake. This way, he began to cross the lake every day.

One day while he was returning from the market, he heard a cry, “Help! Help!” He ran towards the voice. He saw a boy and a girl running towards him. They said to him, “Please help us! Two hunters are following us. They want to kill us.” Kushi assured them and look to a nearby cave. “Stay here. Do not be afraid. I will bring food for you,” Kushi said.

Kushi came back to his home and asked his mother to pack one box of rice and some extra soup along with his lunch every day.

Now Kushi used to make lunch for the boy and the girl living in the cave. After a few days, his mother became curious to know the secret of the extra lunch. She wanted to know to whom her son was feeding daily? At last, she began to ask her son about the secret repeatedly. Her son Kushi got irritated and said, “I will tell you the secret but do not disclose it to anyone.”

After getting her assurance, he narrated the whole incident and the place where the girl and the boy were living.

The next day his mother went to the forest and was surprised to see the lake there. She also saw the boatman with his boat in the lake. She asked the boatman, “How did a lake, a boat, and a boatman appear here? From where did a boy and a girl come to live in the cave?”

She pressed the boatman to tell the things clearly. Although the boatman was afraid of telling the secret, yet he told it to Kushi’s mother. “The god was pleased with Kushi and gifted him with this lake and asked me to work as a boatman. The girl and the boy are sister and brother and have been sent to test Kushi. The lake will dry the day when the sister and brother will not get food.”

But Kushi’s mother could not believe it. She mixed pebbles in the rice for the children. Both of them fell ill. Kushi prepared a medicine out of herbs and shrubs and gave it to them. They recovered from illness. When he was returning home, he saw that the water level of the lake had reduced. He could not understand the reason.

The next day when he was going to work, he heard the sound of pebbles in the lunch box of the children. He threw the food aside and went to work. Both sister and brother remained hungry.

One day, the hunters came and asked Kushi’s mother the address of the sister and brother. According to the condition, she did not tell the address, but she waved her hand towards the cave. As soon as she waved her hand, she became a statue. The lake also dried and a deodar tree appeared in the dry lake.

When Kushi returned from the market, he was very sad to see the dry lake. He did not go to his home. Instead, he prayed to the god and wept bitterly. The god was kind enough and blessed him. The lake was filled again by the drops of his tears.