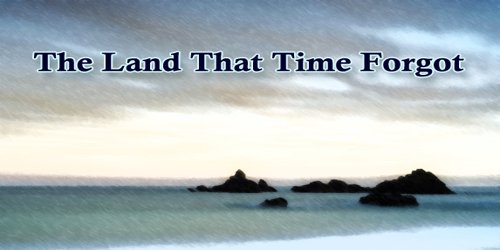 The Land That Time Forgot

Once upon a time a young prince, the son of a man known as the Red King, decided he must leave his home. He wanted to search for a land where old age and death would not find him.

His father begged him to stay, but the prince wanted so much to leave that at last, his father gave him two sacks of gold and a strong, healthy mare. The prince galloped to the edge of the city. There he dug a hole in which he buried his gold in a box and pulled a huge rock over the hole to hide it. Atop the rock, he placed a cross to mark the spot, and then he set off on his quest.

He rode and rode, searching for the magical land, and after eight long years, he came to a palace. There he met the Queen of All Birds That Fly. “What are you seeking?” she asked him.

“I seek a land where death and old age will not find me,” he answered.

“You have found your place,” the queen answered. “Old age and death will not come here until the last twig in this forest is broken.”

Hearing this, the prince understood that he had not reached his goal. One day old age and death would come to this place. And so he rode on.

He traveled for another eight years and came to a palace made of copper. It shimmered in the bright spring light, and outside its doors, a beautiful maiden bowed to him. “I’ve waited for you,” she said, and she welcomed him inside. She prepared a wonderful banquet for him and gave him a comfortable bed for the night.

In the morning the maiden said, “Stay here forever,” but the prince shook his head. “I seek a land where old age and death never come,” he said.

“Until these mountains are flat and the forests disappear, there will be no old age and no death here,” the maiden promised, but the prince knew then that one day they would come. And so he saddled his horse and bade the maiden farewell.

Before long he came to a huge plain, and his horse whinnied and spoke. “Hurry on, prince,” said the horse, “for we have come to the Plain of Regret. Spur me and escape!”

The prince obeyed his horse’s words, and they raced through the Plain of Regret. At its edge, the prince spied a hut, and outside this hut, a lad waved to him and smiled.

“Where are you going, and what do you seek?” the lad asked.

The prince told him of his quest.

“You have reached your goal,” he said. “I am Wind, and old age and death will never reach this place.”

And so the prince decided he would stay.

He stayed for years 20 by his count. And in all those years, he did not age a day. He hunted and rested, and enjoyed his life.

One day he was out hunting when he chanced to come upon a mountain. As he climbed the mountain, he began to feel sad, and so he descended to the bottom and walked into the valley there. As he walked there, tears filled his eyes, and he could think of nothing but his father and brothers and the life he had abandoned so many years before.

He raced home and said to Wind, “I must go home.”

“You climbed the Mountain of Regret,” Wind said sadly, “and you crossed the Valley of Despair. Do not leave this place. Nothing you remember exists. The people you once knew died a thousand years ago. The palace where you lived has turned to dust.”

But the prince did not believe Wind’s words. He waved the words away, saddled his horse, and started his journey back home.

After eight years he reached again the palace of copper. There he saw that the mountains were flat, and outside the palace lay the maiden, the last stick of the forest in her hand. “You returned,” she called, but that was her last breath, and then she died. The prince buried her and went on his way toward home.

Eight years later he reached the Queen of All the Birds That Fly. She called to him, “You are young still,” but with these words, she broke the last branch of her forest, and she too died.

The prince buried the queen and traveled on for eight more years, but when he reached the land where he had lived with his father, he found wilderness.

He ran to the place where he had buried his treasure, and nearly hidden beneath the earth, he found the cross. As he was digging, an old, old man came by.

“Excuse me,” said the prince to the old man, “do you know the palace of the Red King? I am his son.”

The old man rubbed his long white beard. “My grandfather told me about the Red King, but he died more than 1,000 years ago.”

“That is not possible,” said the prince. I left just 20 years ago. Here, “I will prove it to you.” Digging frantically, he, at last, reached the box he had buried.

He lifted the lid of the box, but to his horror, he saw Death seated in one corner and Old Age in another.

In a moment Old Age grabbed the prince from the front, and Death grabbed him from behind, and so he died.

The old man buried him and took the money for himself. He mounted the horse and rode off into the wilderness, wondering at the ravings of the stranger.