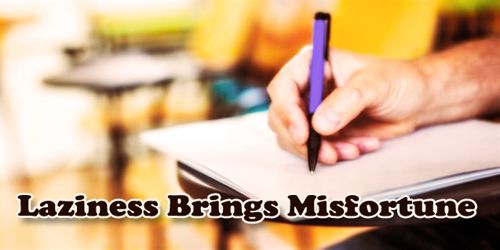 Shanto is a student of class XI in Dhaka Bigyan College. He is not attentive to his studies especially to English because he is weak in this subject. Moreover, the lie is lazy. On the eve of his Year Final Exam, he becomes crazy. He is in a fix what to do. Finally, he manages a short suggestion and starts cramming the answers to the questions in the suggestion. On the exam day, he was quite confused. He saw that the questions were not at all consistent with the suggestion. He was anxious. He began to sweat. He saw everyone was busy writing.

However, Shanto thought he would take help from the students sitting by him. He whispered to his friend Mamun to help him. Mamun agreed and told Shanto to copy his writing. Accordingly, he began to copy Mamun’s writing. Suddenly an invigilator discovered the incident. He warned Shanto against it. He stopped it. But after some time, he again began to do it. Then, unfortunately, it came to the notice of the visiting magistrate. He ordered the invigilator to take away his answer script and question paper. A little later, he was announced to be expelled from the exam hall and debarred from taking the next exams in that year. He felt very sad and helpless. He left the exam hall with tears in his eyes. He sat in an isolated place. He felt very dejected. He began to ponder over his wrong activities and the event of neglecting his studies. He felt so ashamed that he began to think of committing suicide.

But suddenly his reason got aroused. Shanto thought, to err is human. He had certainly made a mistake. But life was not to be ended there. He vowed never to lose time. He must utilize time properly. He must get proper preparation for the exam in the next year and prove that he was also a brilliant student.